A History of Leggings 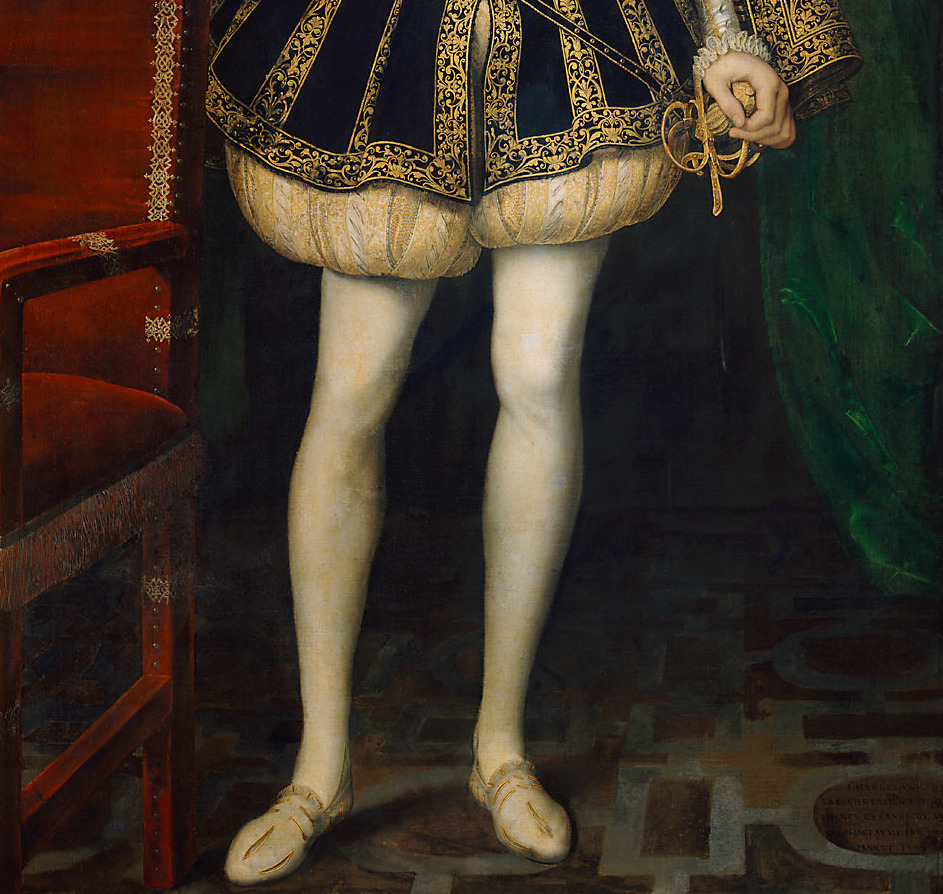 Tatter’s upcoming Hand Sewn Leggings class taught by Louisa Owen Sonstroem has inspired a deeper look into the history of this garment. Today leggings have many different uses and forms – athletic wear, a casual layering piece, or as a base layer for warmth. They can be opaque or transparent, capri length or long, and come in a plethora of colors and material blends. Variations of the ‘leggings’ have existed throughout history for centuries for men, women, and children in different forms. This post will explore a timeline of the history of leggings and their illustrious history.

Starting in the 13th century, hose became an essential part of men’s clothing for both warmth and protection. Early hose were two separate legs made of loosely woven fabric that were designed to fit the leg snugly. They were paired with breeches, which covered the top half of the leg. As it was fashionable at this time for men to show off the shape of their legs, tailors who were skilled at making tight-fitting hose were highly sought after. In the early 15th century, hose turned into one full-length garment, wherein each leg was joined together at the crotch. This change allowed for shortening of the breeches, as more hose-clad leg was able to be shown off. While early Renaissance hose were commonly particolored, later hose worn by upper-class men were typically all white.

Trews, Truis, or Triubhas (the Gaelic word for trousers) originated in 15th century Scotland and became so intrinsically linked with Scottish culture and clothing that they are still widely worn today (albeit in a different, more modern way). Worn for warmth, trews were made of woven fabric cut on the bias, allowing for the fabric to stretch and form to the legs, akin to hose or knit stockings. While they were also made using solid colored fabrics or stripes, the most recognizable and widely used design of trews were tartan. Similarly to kilts, tartan trews became a symbol of Scottish identity and nationalism – so much so that tartan trews were banned alongside kilts in the Dress Act of 1746. Contemporarily, tartan trews are still associated with military and formal dress of Scotland, although they now resemble a more traditional trouser than a legging.

Pantalettes were 19th century undergarments worn by women, girls, and young boys. Pantalettes were extremely similar to drawers, with a notable difference being that they tended to be more ornately decorated or adorned, as they were meant to peek out slightly from the bottom of a hem. They were typically made of white linen. Pantalettes were short-lived in the world of women’s fashion, although they would continue to be worn by children for the remainder of the century.

By the late 20th century leggings, as we know them today, catapulted into popularity. In 1958 DuPont scientist Joseph Shivers invented Lycra (Spandex), and by the next year the first pair of Lycra leggings hit the market. These garments became widely popular throughout the 1960s, 1970s, and 1980s, taking on a variety of colors, lengths, and uses. They were featured on the screen and the runway – and, of course, in the fitness studio.

The versatility of leggings and the many changes to the style over time tell a story of cloth and comfort. Moved by the vast history, the team at Tatter set out to stitch personalized pairs of our own.

The construction of our leggings was simple. With just three pattern pieces, our cloth, and needle and thread we were ready to begin. After a quiet afternoon of stitching together we each went home with a beautiful pair, amazed by the potential and practicality of hand stitching stretchy knit fabrics. The stitches stretch with the cloth, allowing for movement and comfort.

As we slip into our cozy, hand stitched leggings we are reminded of the art of handmade clothing and inspired by the innovation. They warm us as we move through our days, and we can’t wait to see where your leggings will take you.

Learn the wonderful techniques and skills behind the process in our upcoming class Hand Sewn Leggings, taught by Louisa Owen Sonstroem.

C. Willet and Phillips Cunnington. The History of Underclothes. Dover, 1992.