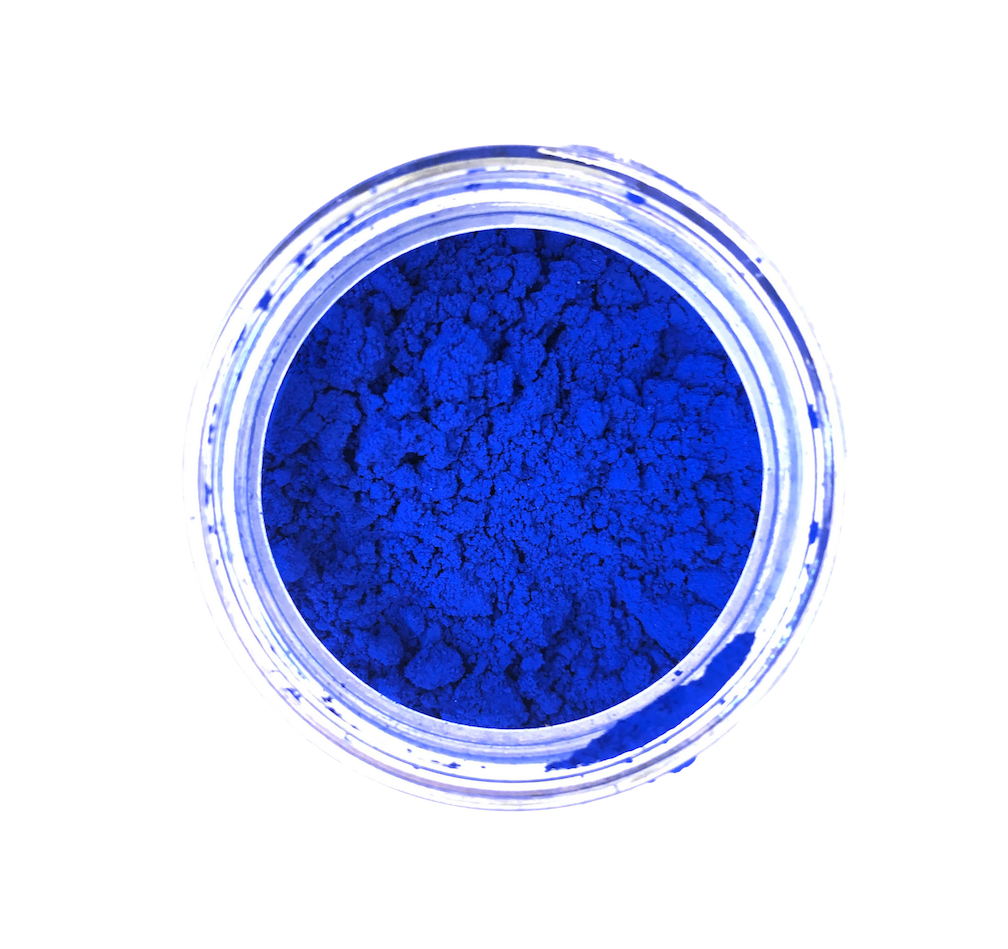 As many of our blues fade – the skies above polluting cities graying, warming ocean waters tingeing green – chemist Dr. Mas Subramanian guides new blues into being.

In his chemistry laboratory at Oregon State University, amongst beakers and desiccators sitting near marble mortars and pestles, rare-earth elements are meticulously selected from their labeled cabinets. Unassuming yellow, white, and gray dusts with exquisite properties are weighed by the particle. The ingredients are ground together in precise ratios and pressed into a circular pellet, held together only by pressure, before the dull round of powder is set in a ceramic crucible and transferred to the kiln. From this infernal dwelling emerges a singular, ecstatic material which transcends its origins – YInMn blue.

The process for making YInMn hasn’t always been so tidy. Named for its ingredients of Yttrium, Indium, and Manganese, YInMn required Subramanian to work backwards from blue. In 2009, while pursuing magnetodielectric materials for electronics, something unexpected emerged from Subramanian’s high-temperature furnace. Andrew E. Smith, a graduate student working in Subramanian’s lab at the time, opened the kiln door one day and was confronted by a lustrous blue. Entirely unreminiscent of its origins, it captivated the eye like gazing into the hottest flame. In the kiln was a blue that glowed. Demanded attention. Disrupted operations. The blue redirected Subramanian’s life work – from semiconductors to color.

Naturally inquisitive, the first thing Subramanian did was ask a question. He wanted to know where the blue came from, and how it was conceived immaculately, without a speck of cobalt. That afternoon he did what any good chemist would – he recreated the exact recipe of rare-earth elements and put them in the furnace at the same 2350° F temperature for the same number of hours. After a sleepless night, Subramanian eagerly arrived at his lab at five o’clock in the morning. He described his anticipation as feeling breathless, hoping the blue was not a mistake. When he opened the door, the kiln glowed with the soundness of repeatability – the fundament of chemists. YInMn blue was not a dream.

When he tells the story, Subramanian settles comfortably on the word “serendipity”. Collaborating with chance is an unwritten step in Subramanian’s method. He glimmers when quoting French microbiologist and chemist Louis Pasteur: “In the fields of observation, chance favors only the prepared mind.” Happenstance may have set Subramanian’s new direction, but he diligently unpacked each “why?” behind his discovery until he had answers to each of his questions. Serendipity was the catalyst, but working backwards from blue to each molecule and their precise structural locations was the result of rigorous, scientific inquiry. As Subramanian reverently explained, “Blue isn’t magic – it’s chemistry.”

With the elemental origins of YInMn confirmed, the destination for this blue material grew into a question. Where will this blue eventually go? Will it fade back into the earth from which it came? Subramanian answered, sharing YInMn’s special properties. It’s heat-resistant. It is unusually safe. And it’s exceedingly stable. YInMn blue is an isolated moment of permanence, a comforting and dependable source of blue. Though its binder may crumble, this blue pigment will last as close to forever as any color can.

YInMn blue is rendered from both the chemical composition and the arrangement of atoms in its crystalline structure, known as trigonal bipyramidal. With these truths established, Subramanian expanded his findings from one to several shades of blue. Not by adding white, but by changing the chemical ratios of each ingredient. Color is not only a set of conditions. It’s a math problem made with mutable variables like chance and instinct.

In 2019, Subramanian discovered another entirely new class of pigments. From the rare-earth elements underfoot, Subramanian shifted his thinking to a crystalline structure that enters our atmosphere on the backs of meteorites. In 2019, he speculated that hibonite, a naturally occurring structure, could inform a second new blue. His intuition revealed that hibonite structures could indeed be reproduced in the lab with calcium and aluminum oxide, titanium and cobalt. Hibonite blue differs from traditional cobalt by needing only trace amounts of the contentious ingredient. Subramanian found that hibonite could facilitate blue in a more affordable, accessible way than previous blues.

Hibonite does not naturally come from the earth but instead from the most faraway reaches of the cosmos. Meteorites are mobile conduits, pulling mineral structures from the fabric of space through the atmosphere to Earth. When a meteor enters our blanketing atmosphere, it collides with our terrestrial rock, a crash at thousands of degrees. This severe heat is like a kiln, transforming and stabilizing the mineral’s structure. Evolving, metamorphosing into blue.

Across millennia, only a handful of new blues have ever been unearthed. Before YInMn, the most recent blue to be found was cobalt, 200 years prior. It’s remarkable to be alive at the same point in time a blue is discovered. There isn’t a word to describe how phenomenal it is we were here for a second. And that both of these blues will not fade in the sun or break down in the heat; they will not lose their depths when exposed to acids; they will not turn gray alongside our changing environments.

Subramanian has a practice of finding ingredients for blue underfoot and cultivating methodologies for blue overhead. His first pigment discovery – from earth – and his second from a meteorite are visceral discoveries that meet on a horizon where so much meaning vibrates. Blue, specifically, creates a channel between our planet and the sky, chemist and human, Subramanian and us. He describes his work’s richness by evoking the meaningful connectedness he has found with people around the world. People who are also overcome by the wordless power built into the structure of blue. In his characterizations of the new pigment, it feels sweet to wonder, is connectivity – not the electrical but the human kind – a component of color that should be analyzed too?

Subramanian never expected this to be his life’s work. He offered, “I never imagined I would work in this area. Life is full of surprises. I never knew I would discover a new blue pigment.” How fortunate are we that Subramanian is attuned to serendipity? And that he fearlessly follows the magic it presents until he has answers? Until he sees the chemistry of magic and not the other way around. Our world now has the gift of two ecstatic dependable blues – two bright, blue stars here on Earth.

Mas Subramanian is currently a University Distinguished Professor of Chemistry and Milton Harris Chair of Materials Science at Oregon State University. He is internationally recognized for making several breakthrough discoveries in materials chemistry that include a novel durable blue pigment, YInMn Blue, the first new blue pigment discovery in more than 200 years. Professor Subramanian has received several national and international awards including prestigious International Perkin Medal from Society of Dyers and Colorists (UK) for the discovery of YInMn blue. He is also Fellow of American Association of Advancement of Science (AAAS).

To learn more about the research of Mas Subramanian visit @Mas_OregonState

Next StoryA Blue of Renewal