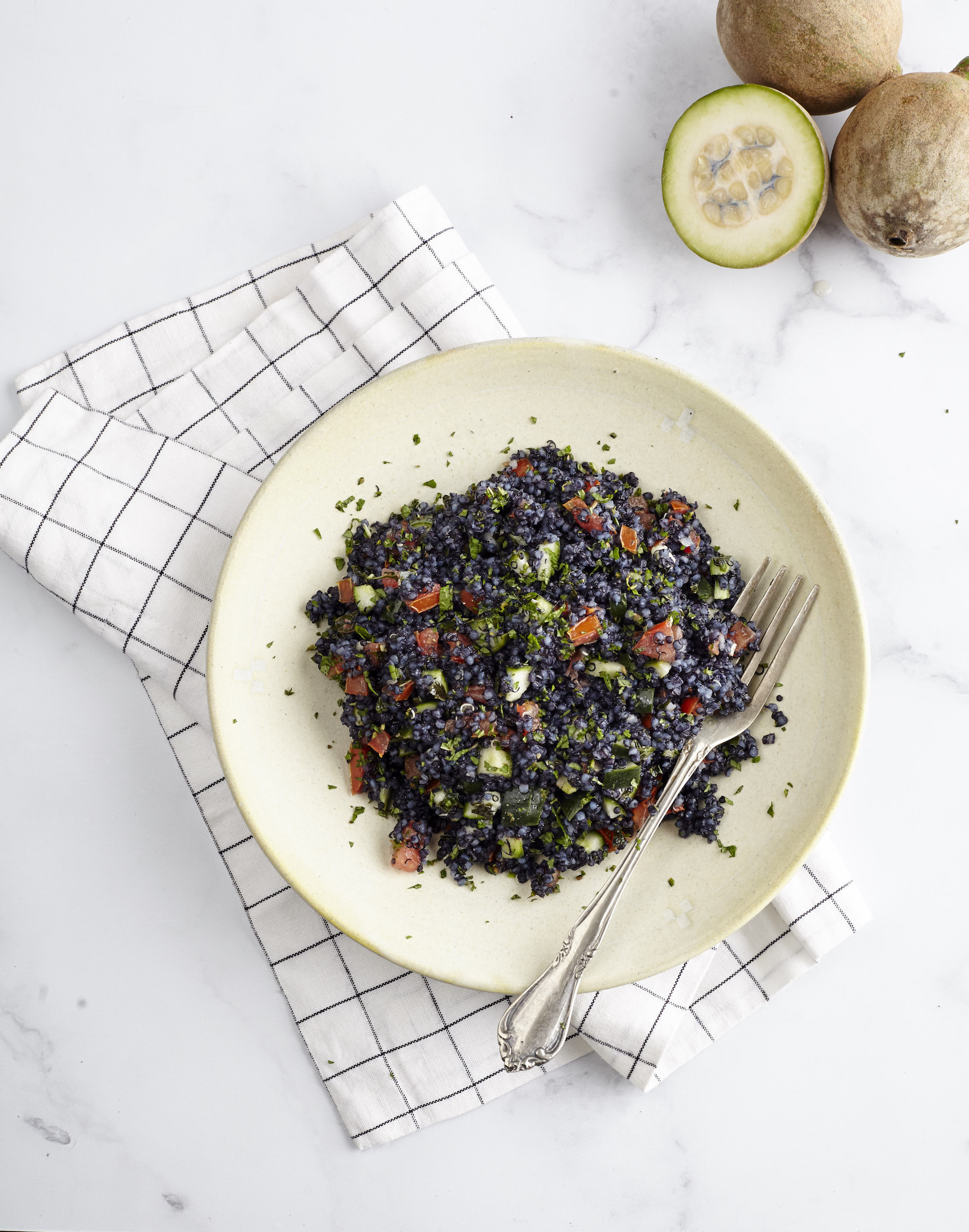 A Blue for Consuming

Jenipapo and the taste of the unexpected.

When we imagine a ripe yellow banana, one whose green ribs have just mellowed, many of us can picture what will happen when we peel away its protective skin and stringy phloem bundles, sinking our teeth into the fruit. The flavor, texture, even the smell is so familiar that we can almost cognitively taste it without touching fruit to tongue. It’s predictable. But what happens when we are met with a food so unfamiliar, so devoid of association, that we don’t know how to experience it?

Every chef faces the unpredictable variable of a diner’s receptivity. Curiosity gives a chef the ability to surprise us. To displace us. To offer our bodies, usually comfortable with the act of eating, something unexpected – something out of the blue.

Bela Gil is a culinary alchemist. She is a well-known nutritionist, chef, cookbook author, and the host of her own television show. After nearly a decade in New York City – spent pursuing culinary school and a degree in Nutrition and Food Science – Gil missed the fruits and vegetables, textures and tastes of Salvador, the capital city of Bahia in Brazil where she was born. What was abundant in Bahia was absent from New York. Returning to Brazil and relocating to Rio de Janeiro, she rediscovered her enduring childhood memories, focusing on ingredients and techniques native to her home country.

Gil brought with her an insatiable desire to learn about nonconventional edible plants that could expand what is expected of Brazilian food. She studied unripe foods – green bananas, green papayas, green jackfruits. She traveled around the Amazon, attending off-grid gatherings of women, and spent time with several indigenous communities who welcomed her to learn about food by experiencing it. Ingestion can be both an embodied and an in-body form of learning. Sometimes, new ideas for food can even be found on the body. For centuries, indigenous Brazilian communities like the Ticuna and the Ka’apor have maintained the ceremonial practice of decorating the skin with temporary surface stains made from a particular unripe fruit. A fruit with a capacity to nourish, but also, unexpectedly, for blue – jenipapo.

Large jenipapo berries emerge from genipa – Genipa americana – trees found in Central and South America. Between the boundary of skin and the seeds at its center is a fruity flesh containing genipin, an iridoid compound found in high volume before the berry has ripened. Though the language of chemistry complicates its natural poetry, what jenipapo produces is actually simple. Genipin, in the presence of oxygen, bears blue. A transitory blue. One that, when exposed to amino acids or proteins like those found in our skin, can eventually darken to black.

Gil, a plant-based chef, was eager to pursue the mysterious blue properties of jenipapo, which she knew were potent. Her first memory of eating jenipapo is sweet. Candies and syrups made from the ripe fruit sway her early recollections. However, when eaten raw without sugar, ripe jenipapo has a sour taste. Before it ripens, Gil discovered, jenipapo lacks any flavor besides bitterness. The recipes that Gil’s experiments would lead her to design would incorporate only a trace of the bitter ingredient.

First, Gil peels the green jenipapo. She cuts it into cubes. She blends it with water and strains the liquid out, using the juice to cook a protein-rich ingredient, like quinoa. Before her eyes, the blue deepens. It saturates each seed in blue. She describes a similar process for baking blue bread – though for bread, she cooks the jenipapo in a protein-rich cashew milk instead of water.

Once the jenipapo has imbued a food with its surprising blue, Gil is free to experiment with any flavors she chooses. The blue is so unexpected that even if familiar flavors follow, they will become unexpected also. Sour lemon, floral honey, spicy chili sauces can re-introduce themselves. Gil facilitates these second-meetings in her restaurant, Camélia Òdòdó.

Camélia Òdòdó promotes local ingredients across Gil’s plant-based menu. Gil’s featured recipes experiment with the powdered, algal blue of spirulina and the liquid blue of butterfly pea flowers that change from blue to pink with an acidic squeeze of lemon. Customers and diners receive the food with curiosity. Those unfamiliar with Gil’s philosophy as a chef and nutritionist wonder where the blues come from, often assuming that she must use edible synthetic dyes. Such a thought is natural when many blue foods read as poison on a primal level. But Gil is quick to dismiss the possibility of chemicals coloring her healthful food. Those who know her never question the bright colors’ origins. Instead, they take an amazed pleasure in the magic of her plant-derived blues. Gil tells her diners that blue grows humbly all around them in the unripe fruit of their jenipapo trees.

The experience of deeply nostalgic foods is turned upside down by the attempt to imagine eating something new. Memories may hold a place for foods we wish to taste again, but memory alone will never render an empty mouth full. Until our taste buds are flooded by actual remembered flavor, we are left unsatisfied – no matter how strong the familiarity and comfort, associations and pleasures, predictability of flavor or texture.

What does it mean to design someone’s first introduction to a blue food, a reference they will take with them? To offer a fullness, not only of body but also of mind? To be met with the unexpected – the total absence of memory or association – is undeniably powerful. What we choose to eat is often held in our softest yet firmest philosophical places. When met with the unexpected, we are given the chance to reevaluate our truths. Perhaps these could be more malleable than they often feel.

When offering a new experience, one so intimate as to go into the mouth and be absorbed by the body, Gil finds that making food beautiful is essential. Especially as a plant-based chef, she knows that visual appeal invites people in – convincing us that food is palatable. Making us curious enough to taste, to consider. Allowing us to meet our plate with openness. Consuming blue – natural, jenipapo blue – might do more than help us expand our relationships with food. Jenipapo can help us understand and embody blue.

Bela Gil generously offers us each her recipe for exploring the unexpected, for tasting natural, jenipapo blue.

Method of preparation
Blend genipapo and water in blender, pass through sieve and save juice
In a mid-sized pot, mix the quinoa, juice of genipapo and salt
Let simmer for 15 minutes. Keep covered.
Turn off the heat.
In a large bowl, mix all ingredients,
Make any adjustments to spices and serve.

Bela Gil is a chef, nutritionist, activist and author of 5 bestselling books in Brazil. Her career has spanned many fields: food, television and media, healthcare, women’s rights, public policy, and education. She hosts a cooking show where she visits small organic farms, teaches the principles of agroecology and cooks for Brazilian celebrities and Bela just opened the vegetarian restaurante Camélia Òdòdó in São Paulo. Bela’s goal is to raise awareness about the importance of healthy cooking and eating in order to sustain a harmonious life and planet.

She graduated with a BS in Nutrition from Hunter College and a diploma in Culinary Art’s from the Natural Gourmet Institute, both in New York. In 2019 she got a Master degree of Gastronomy at the University of Gastronomic Sciences in Italy.

To learn more about the work of Bela Gil visit belagil.com / @belagil