The ceramic, neon, and video blues of Jessie Rose Vala. 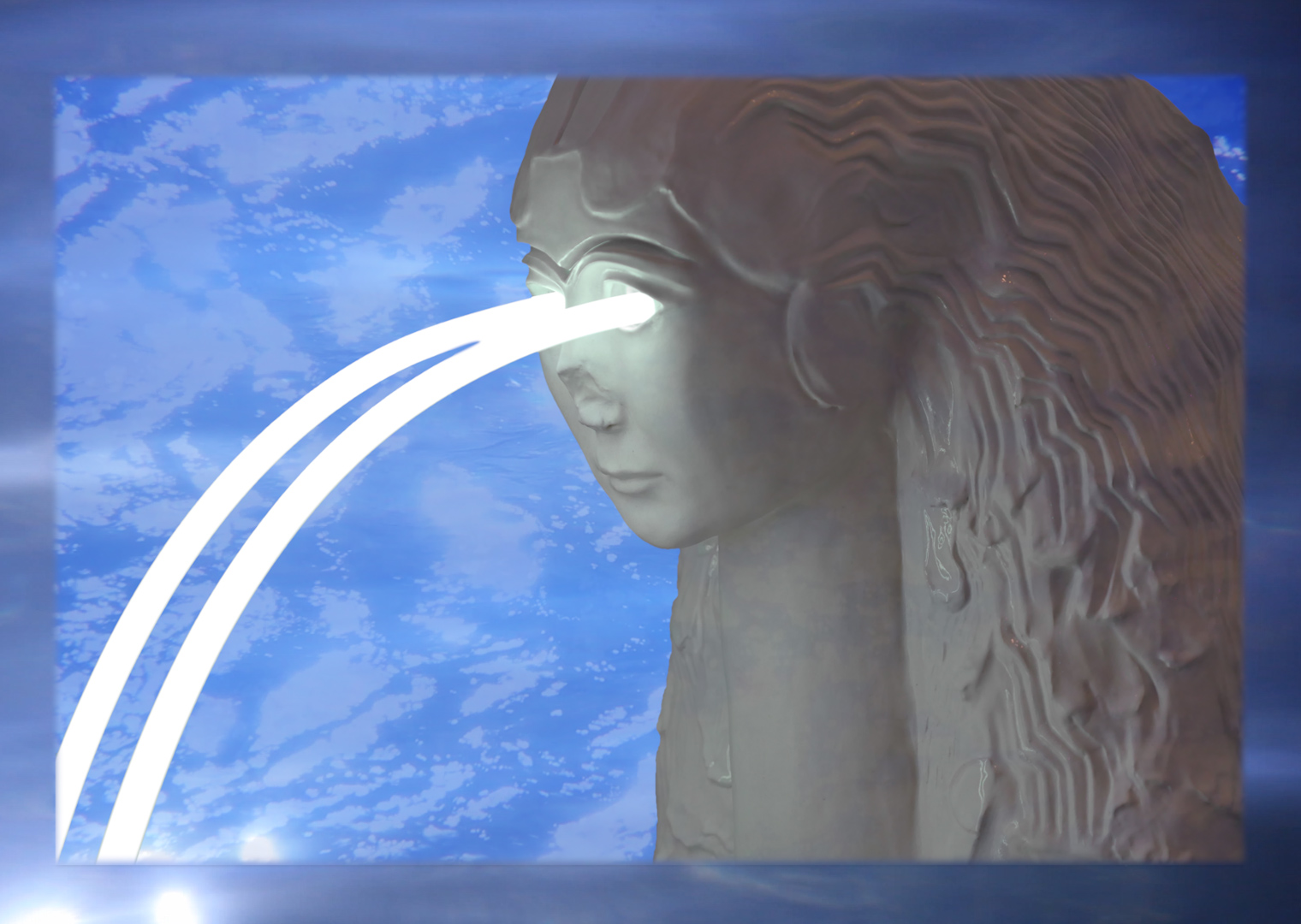 Jessie Rose Vala had a neon childhood. The buzzing colors of neon gas trapped in vacuum tubes cast vivid colors across the 1980s. And that particular glow, often a blue one, now saturates many object emergences in Vala’s practice. Neon blue is in its element when it meets Vala’s science fiction inspirations, beautifully out of its depth when introduced to ancient mythos. In this contradictory space, underworld meets speculative future, solid stoneware meets vibrating neon, and stable blues meet liminal blue portals. Jessie Rose Vala’s world is potent. It’s drenched in mysteries both ancient and future – where to be a time traveler is normal and to be fixed in any singular era is far less so.

Time^Object^Conduit is a four-channel video piece that acts as a vessel to hold those three words, like a microcosm of Vala’s practice. Objects imbued with mythological meaning and spiritual purpose circulate throughout the video. Ancient Cypriot vessels rotate and pass through select frames. They become crisp in view before fading back into the layers of video patterned with glimmering, blue water.

Time^Object^Conduit was originally made for an installation at Reese Bullen Gallery in Arcata, California. This iteration was commissioned by Faten Kanaan and Fire Records to be paired with Kanaan’s song, “Sleepwalker”. The song appears on Kanaan’s album, A Mythology of Circles. The side of the album on which this song appears is thought of as the underworld and dream state in which the cycles of nature and time are explored.

A pointed ellipse shape flickers above one of the vases – a familiar shape soon repeated in the watchful eyes of the Mask of Warka. Known also as Lady of Uruk, named for the ancient city of Sumer located in present-day Iraq, her eyes were likely made with white shells detailed by blue Lapis Lazuli irises and pupils. These materials would have been fastened into the pointy, ellipse-shaped space made for each watchful eye—the same shape, serendipitously, as a single indigo seed. In Vala’s piece, the eyes remain negative space. Instead of Lapis Lazuli or another opaque material, layers of shimmering water are both what is seen and what is performing the act of seeing.

The Mask of Warka was possibly a depiction of the ancient Mesopotamian goddess, Inanna, who made her mythological dwelling in Heaven. Perhaps, however, Inanna longs for a conduit to reach the deep blue below the atmospheric overhead. Maybe she could feel more at home in the underworld of the quiet ocean? Where soft bodies live and most creatures produce their own light? Tears of Inanna, a white ceramic work, absorbs and reflects the glowing blue of its environment, the blue liquid crystal display (LCD) and the buzzing neon that pours in and out. The ceramic, solid stone that has undergone alchemical processes and extreme heat, is brought to life with the ringing blue neon – a difficult, near-impossible color to catch with the human eye.

Blue vibrates. An explanation exists for the difficulty of seeing this light – fewer cones and rods in our eyes can perceive this area of the spectrum. The challenge of perceiving blue clearly is physiological: blue is something always to chase and never to grasp. Running after blue is a game without an end. Searching for crisp edges and only ever arriving at the blurry fringe. Perhaps blue is like Inanna, most comfortable in motion. Or a conduit to hold other beings while they are in motion.

In Vala’s video work and ceramic pieces, numinous blue welcomes us through portals dressed as neon arches and ancient, watery eyes. It is no accident that Vala’s portals are often found in the water. Liquid liminal bodies of waves, pools, and tears connect to one another around the world beyond space and time. They are an origin of life and an eventual destination. Blue – aquatic blue – guides the way.

Jessie Rose Vala (born 1977, Madison, Wisconsin) is a multimedia artist working in sculptural ceramics, video, drawing and installation. Vala received an MFA from University of Oregon and a BFA in ceramic sculpture from California College of the Arts in Oakland, California. Her work has been exhibited nationally and abroad includingTruck Gallery (Calgary, Canada), V1 Gallery (Copenhagen, Denmark), Present Company (Brooklyn, NY), and Reese Bullen Gallery at Humboldt State CA.  She has received grants and fellowships from the Oregon Arts Commission, PICA, the Ford Family Foundation, Archie Bray amongst others. Vala is the founder of Ungrund Collective, a collective of female video artists who curate screenings nationally and is currently career faculty at University of Oregon.

Brooklyn-based composer, musician, and producer Faten Kanaan builds up cyclical patterns in her music, using harmony and counterpoint as narrative tools. Sound & silence become intuitive gestures that tell a wordless story. Inspired by cinematic forms and literary structures: from sweeping landscapes and quiet romances, to patterned tensions and dream sequences; she focuses on bringing an earthy, visceral touch to electronic music. In symbiosis with technology is an appreciation for the vulnerability of human limitations and nuances.

To learn more about the work of Faten Kanaan visit fatenkanaan.com / @fatenkanaan

Next StoryThe Story of a Blue Mushroom