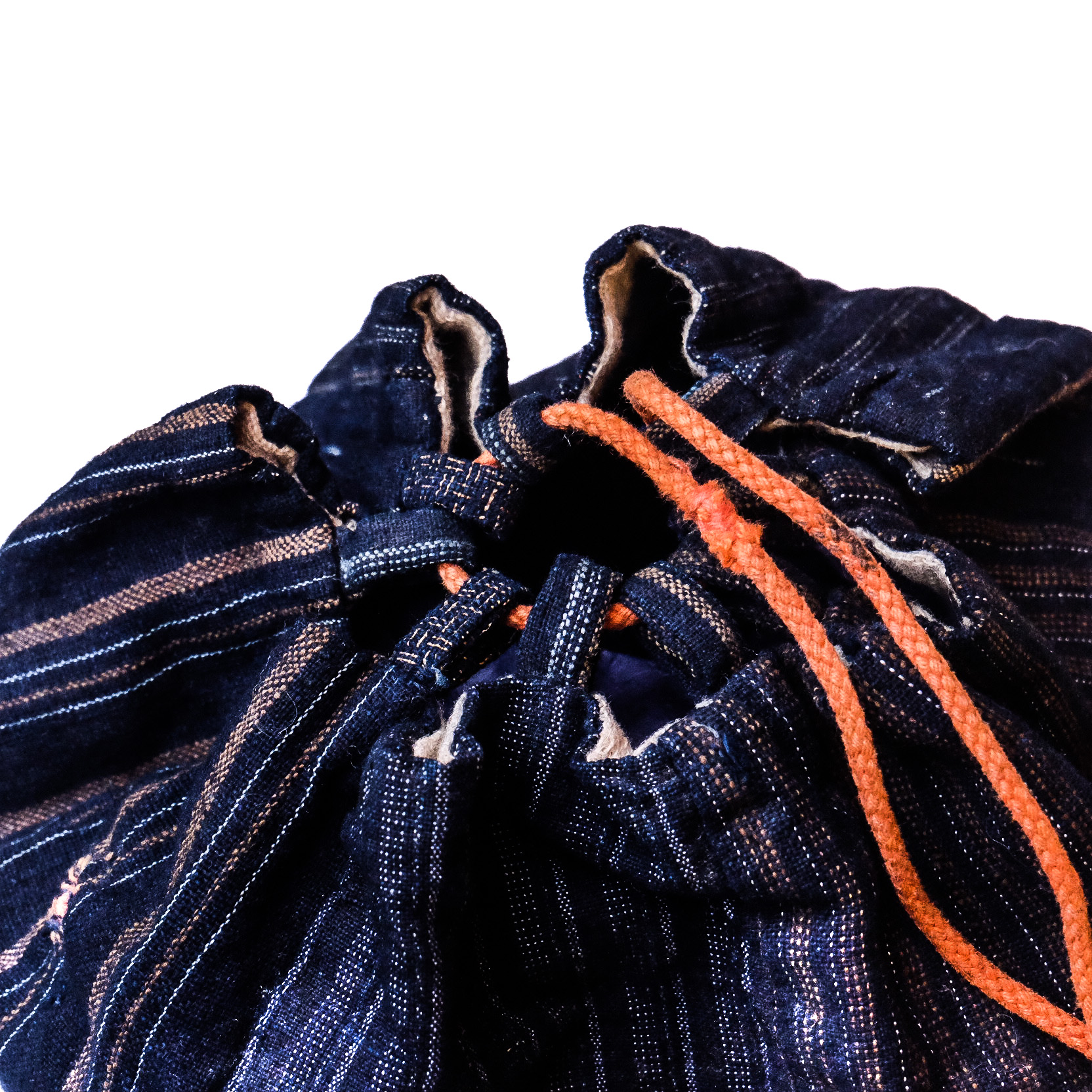 I am a patchwork drawstring bag known in Japan as a komebukuro. I am composed of four different indigo-dyed striped cotton textiles pieces, beautifully patched together. I was made to tote offerings of uncooked rice or beans to local temples and shrines during festivals. My maker stitched me while she was looking forward to the upcoming festivals, and my patches and color scheme reflects her celebratory mood.

Some of my striped (shima) patches were repurposed from the household’s worn out textiles, while others were obtained from cotton scrap merchants trading along the Kitamaesen route. My maker joined the scraps with a running stitch (sashiko), a style that has come to be known as boro– meaning tattered or ragged. Indigo-dyed blue and white colors are often seen in rural Japanese boro textiles, however persimmon-dyed brownish-orange accents are also included in the color scheme of my vertical woven stripes and drawstring– expressing my maker’s good mood and the special purpose I was made for.

My recycled patchwork is rooted in the Japanese concept of mottainai, in which an object’s lifespan is prolonged through recycling and repurposing. Because this idea is derived from religious teachings and moral precepts, it makes perfect sense that a komebukuro such as I, with the special task of transporting sacred offerings, should be made in this way. Shinto holds that all material objects possess a kami (god, divinity), and are therefore deserving of reverence. Buddhism teaches that wastefulness and excess indulgence are misaligned with Buddha’s teachings. It is no wonder my maker treated me with such care throughout the years.

On days of festivals and special ceremonies, my maker and her family filled me with uncooked rice to be offered to local temples and shrines. My role of protecting and transporting the offering was critical, because the rites of the festival were understood to be very important. Since the Japanese economy and diet depended heavily on rice, ensuring an abundant harvest was paramount. Cultivation of rice requires plenty of water, which means that prolonged drought could compromise crop health– leading to a poor harvest, and subsequent financial struggle and food shortages. Therefore, going back to the late Yamato period (around 700 A.D.), a variety of rain-making rituals, both Shinto and Buddhist, were adopted to ensure adequate precipitation for the rice crops.

For centuries, local belief systems held that gods presided over the prosperity of the rice fields. These gods emerge from the mountains in the spring, abiding in cherry trees and holding watch over the rice plants and ensuring an abundant harvest. So, every year when I noticed the first blooming of the cherry blossoms I knew the rice gods had descended and the rice-planting season, with all its rituals and festivals, had begun.

To serve as a vessel for tribute to the gods of the rice fields was a great honor for me, and my maker made sure I always looked my best. Every grain of rice was important, so even the tiniest hole in my cloth could lead to rice loss and jeopardize the ceremony. My maker mended me regularly, using a bright orange colored thread that coordinated nicely with my overall color scheme and celebratory function.

Each festival I attended had its own character and purpose. In the first half of the year, I toted offerings to planting festivals. These are very important ceremonies with lots of dancing, ritual purification of seedlings, and praying to the gods for a bountiful harvest. The warmer weather of July meant it was time for the Rain Festival, in which I was brought up a mountain in grand processional style (Take no nobori) with music and streaming banners, so that the townspeople could ask the gods to bless their rice fields with rainfall. If my offerings were a success, I attended the Nukiho festival at the nearby shrine in September – stuffed to the brim with rice offerings to give thanks for a bountiful harvest. At this festival I watched girls cut the heads of the rice and offer them to the deities and ritualized sumo contests in honor of the gods. Finally, in early November I transported ripened rice grains to the Rice Festival at the local temple. I loved this festival because I got to observe the magnificent procession of the fox-spirit bride, the Inari deity of the Shintō sect. Those who participated in the procession wore fox masks as they rode through the autumnal town displaying their gratitude for the blessings they received and for the fruitful harvest. This would all start again soon, with the planting of the next crop. Occasionally, I was also utilized to transport dried rice as ritual offerings made to the hungry ghosts (segaki), to appease their insatiable hunger and protect the living from their torments.

Because the jobs I performed were so important to the wellbeing of the local people and I would often enter holy sites, my maker kept me in the best condition she could, mending me and washing me regularly, to expel the smell of rice and incense embedded in my layers. I performed my tasks well for many years, taking pride in my usefulness and the care I received.

After my maker and I parted, I was stored away for some time– no longer traveling full of rice or observing the dancing, processions, and celebrations. After feeling a bit useless in my retirement for a time, I was rediscovered and placed in a collection where I am cared for and revered once again, not as an offering vessel, but because each stitch and layer that I am composed of tells my story, and the story of rice, local beliefs and celebrations in Japan.

Mottainai: The Fabric of Life Lessons in Frugality from Traditional Japan. Third exhibit in the Art in the Garden series, Gallery Kei & Sri, Portland Japanese Garden, 2011.

Make your own drawstring bag