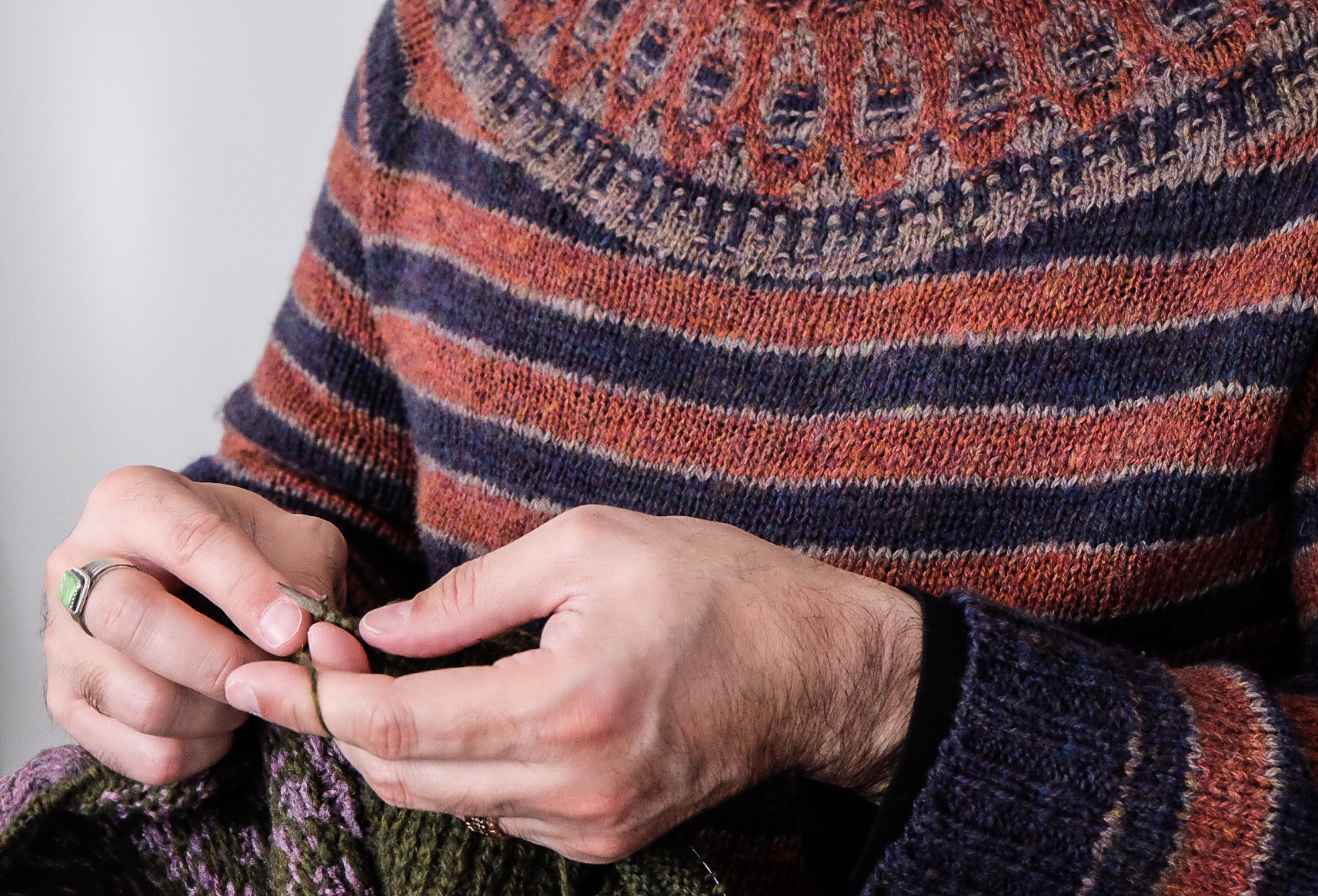 Mathew Gnagy is a prolific maker. His skills are boundless. With equal mastery he spins wool, weaves, makes lace, knits, crochets, pattern drafts, designs, and sews. It’s all connected – the techniques build upon one another as they incorporate variations of the same movements, combining to create the cloth of his practice.

Mathew grew up inspired by the work and ethos of the creatives in his family. His grandfather was an artist who believed in the power of teaching – that anyone could create beautiful things given some instruction. His mother too was an artist, working with textiles. His father was a musician and a philosopher and his stepmother an avid knitter. In Mathew’s home, it always felt important to be making something beautiful to put into the world. Determined and motivated, Mathew taught himself to crochet at the age of six, using his allowance to buy his first supplies and learning from library books. He taught himself to knit and sew in the two years following – all skills that have remained steadfast in his practice.

From a young age, Mathew realized the potential and power of creating clothing. He fostered this passion through middle and high school as he began making historical costumes for himself and his peers for events and productions. He remembers this as a playful, collaborative experience that pushed him to source information and materials. It brought him a lasting joy for making that he has continued to nurture. He began sewing modern clothing for himself in middle school as a way to cater to his body shape and to express his personal style. In his later attempts to learn the techniques of suitmaking, Mathew kept arriving at roadblocks. Much of the information he sought was cloistered and inaccessible. His growing interest in making clothing was driven by a deep-seated desire to research and create, but much of the skill had to be self taught.

Mathew has studied innumerable techniques that span the centuries, culminating in his incredibly crafted garments and patterns that at once honor these technical traditions and push them to modern ends. His garments are thoughtful, each stitch well researched and selected to suit both cloth and garment, while anticipating the movements of the body. Mathew came to hand sewing for modern use after the realization that it didn’t take much more time than sewing with a machine. In fact, it simplified many techniques made difficult and tedious by mechanized sewing. As he had already been hand sewing historical garments for over a decade, he began incorporating these skills into his clothing designs to create strong and modern pieces built on the foundation of historical and technical knowledge.

Prior to the advent of the sewing machine in the mid-19th Century, all clothing was made by hand and made especially to fit the eventual wearer. With the increase of industrialization and its effects on the fashion industry, bespoke clothing has become more of a novelty, sequestered in favor of readily available products. The products are made for a standardized fit model – one whose proportions are not reflective of the widely varied shapes and sizes of people in the world. Language describing variance in body size and shape supposes a deviance from this imagined norm and influences our self-description and perception. Mathew’s work reminds us of the potential of making clothing for oneself as a mode of expression and of reworking normative ideas of body and identity. The garment becomes a place for creativity and a source of personal empowerment. He says:

In his teaching, Mathew echoes the spirit of his grandfather, believing in anyone’s ability to learn foundational techniques to create something beautiful. Practice and perseverance are necessary to master the skills. Mathew stresses that learning from the failures and mistakes is an incredibly important part of the journey and a process to be enjoyed. He finds immense joy in helping others realize their creative visions. Mathew’s goal is not only to explain how something is done, but why it is done. He aims to impart the necessary skills to realize beautiful, wearable clothing and to make this information more widely accessible to those who seek it.

His dedicated study of the lineages of handcraft has allowed him to understand the purposes and developments behind it all. We are inspired by this breadth of skill and commitment to research as Mathew works to share these techniques, ensuring they continue to be used and understood for generations to come.

In the upcoming Button Front Shirt class, Mathew will demonstrate the order of operations and some of the best stitches for each student to make a beautiful, hand sewn shirt of their own.

Mathew Gnagy is the author of five books on knitting and historical techniques in tailoring. He has worked in many areas of costume and fashion, from pattern maker, to dresser, tailor, and more. He taught in the BFA fashion program at Parsons for several years and prior to that was one of their hand knitting instructors. Gnagy’s business focuses on teaching people lost hand-work skills in an effort to both keep those skills alive, and to serve as an empowering alternative to fast fashion, toxic immediacy, and body dysmorphia caused by the marketing tactics of the industry.