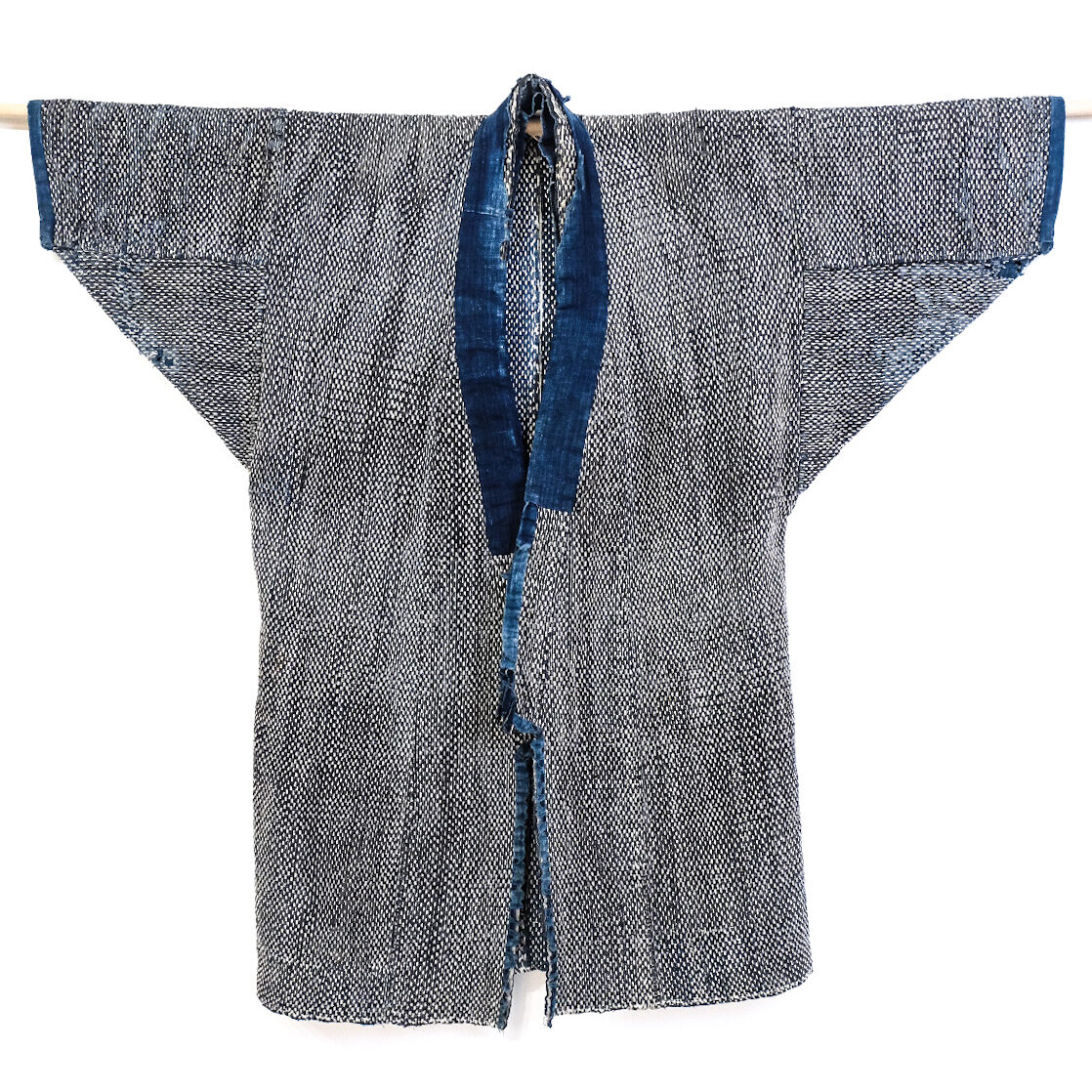 I am a farmer’s coat from a Japanese village where the weather was harsh and the people made do with what they had. Most of the farmers and fishermen had coats that looked like me, usually made of work-worn layered and patched indigo-dyed textiles reinforced with sashiko (sasu or sashi meaning ‘to stitch’ or ‘pierce,’ and ko meaning ‘small’), a type of utilitarian embroidery usually done with running stitches of white thread.

I was made in the early twentieth century by the farmer’s wife who wanted to protect our farmer from the bitter cold and inclement weather he faced while working the fields. She had learned how to weave, sew, and repurpose textiles, taught by her mother. The farmer’s wife made efficient use of everything, and whenever she observed someone discarding anything that she deemed to still be useful, she would exclaim, “mottainai!,” meaning something along the lines of “don’t be wasteful” or “what a waste!” To her, such unnecessary wastefulness was inexcusable, not only because her family did not have much, but because, to her, all objects and materials were precious and worthy of respect.

For those who made coats like me, cotton was highly valued because it was harder to come by. My farmer’s wife often made her family’s clothing with bast fibers, such as hemp and ramie, which were challenging to work with and never seemed to keep my farmer warm enough in the winter. She treasured every piece of warm cotton cloth she could obtain, which usually consisted of used cotton textiles sent from Edo to Naniwa to be traded throughout Japan.  When I learned that I was to be made of three layers of cotton cloth I knew I had an important role to play.

To prepare to make me, the farmer’s wife had collected three large striped (shima) resist-dyed textiles that probably once existed as clothing worn by urbanites in late nineteenth century Edo,  salvaged from the used textile trade to be repurposed. Smaller pieces of shima cloth and indigo dyed strips were also saved, and would be used to reinforce my neckline and the ends of my sleeves. All of the textiles she chose for me, save for one shima layer of faded black sandwiched between my inner and outer layers, were dyed with indigo. This was no coincidence, but a practical decision. Indigo was the perfect choice for a protective work coat like me, as it was believed to possess medicinal properties, repel odors, snakes and insects, and retained a beautiful blue color even as it faded. She also chose a simple shima patterned indigo because of the sumptuary laws that required the Japanese working class to wear modest fabrics and avoid the bright colors with extravagant patterns, as more lavish garments were reserved for the elites.

Compared to the sumptuous silks of the upper class I was humble, but I knew I was made to be strong and useful, which is why the farmer’s wife always mended and cared for me. After the harvest was complete and the weather grew colder, the farmer’s wife began the arduous task of sewing me together. I was designed somewhat like a haori or kimono, with a rectangular body extending just below the knee, but like all work coats my sleeves were constructed in a more tubular style with a tapered wrist opening– mine being constructed in a makisode rolled-sleeve style. Before my layers of cloth were quilted together, they were basted with indigo thread to hold them in place.

While many would have mapped out a sashiko pattern to follow using a tracing spatula (hera), my maker did not: ever practical, she decided to do a running stitch along the striped cloth instead. Over many months, she patiently and persistently joined my layers with hundreds of tiny sashiko stitches. While some were making more decorative sashiko during this time, my farmer’s wife was more interested in utilitarian concerns: insulating our farmer against the cold, protecting him from the elements, and making sure I would be strong and long-lasting –  a tradition of sashiko reinforcement her mother and grandmother before her had employed on their family’s workwear going back to the Edo period. As she stitched away by the fire for months on end, she would sometimes call her daughter over to teach her sashiko, as she too would one day be expected to recycle and repair textiles for her family. If you look closely, you will see that the vertical lines of my sashiko do not align with the stripes of the printed fabric; sometimes the daughter’s stitches was not perfect, but she learned.

I shielded my farmer from sun, rain, wind, cold, and pests, and in return his wife took care of me, mending me where I grew weak and threadbare. For many years I was worn layered over his clothing, bound with a straw rope obi called a nawa, with a wide brimmed straw hat as he planted and plowed. Over time, frays and tears began to appear around my neckline and sleeves, to the point where my second layer of cotton fabric began to show through. While the farmer’s wife made sure I remained strong and intact, after a while people began to call me boro, meaning ‘tattered.’ It was not until after my farmer and I had parted that I was stored away, and no one repaired or looked at me for years.

Following the Meiji era, well-worn boro textiles like me were regarded as reminders of past poverty and hidden away. Eventually, my mended and tattered appearance would come to be appreciated once again, not in spite of, but for my visible signs of age and perishability, which came to be understood as beautiful. I no longer protect my farmer and nor am I mended by his wife, but each tear and stitch is a reminder of my past life with them. Today, I am treasured not for my usefulness, but for my imperfect beauty and the many memories I hold – no longer hidden away as an object of shame, but appreciated as a symbol of care, perseverance, and survival.

Szczepanek, Stephen. (Textile specialist, owner and curator of Sri Threads) in discussion with the author, April 2021.