The History of the Thimble 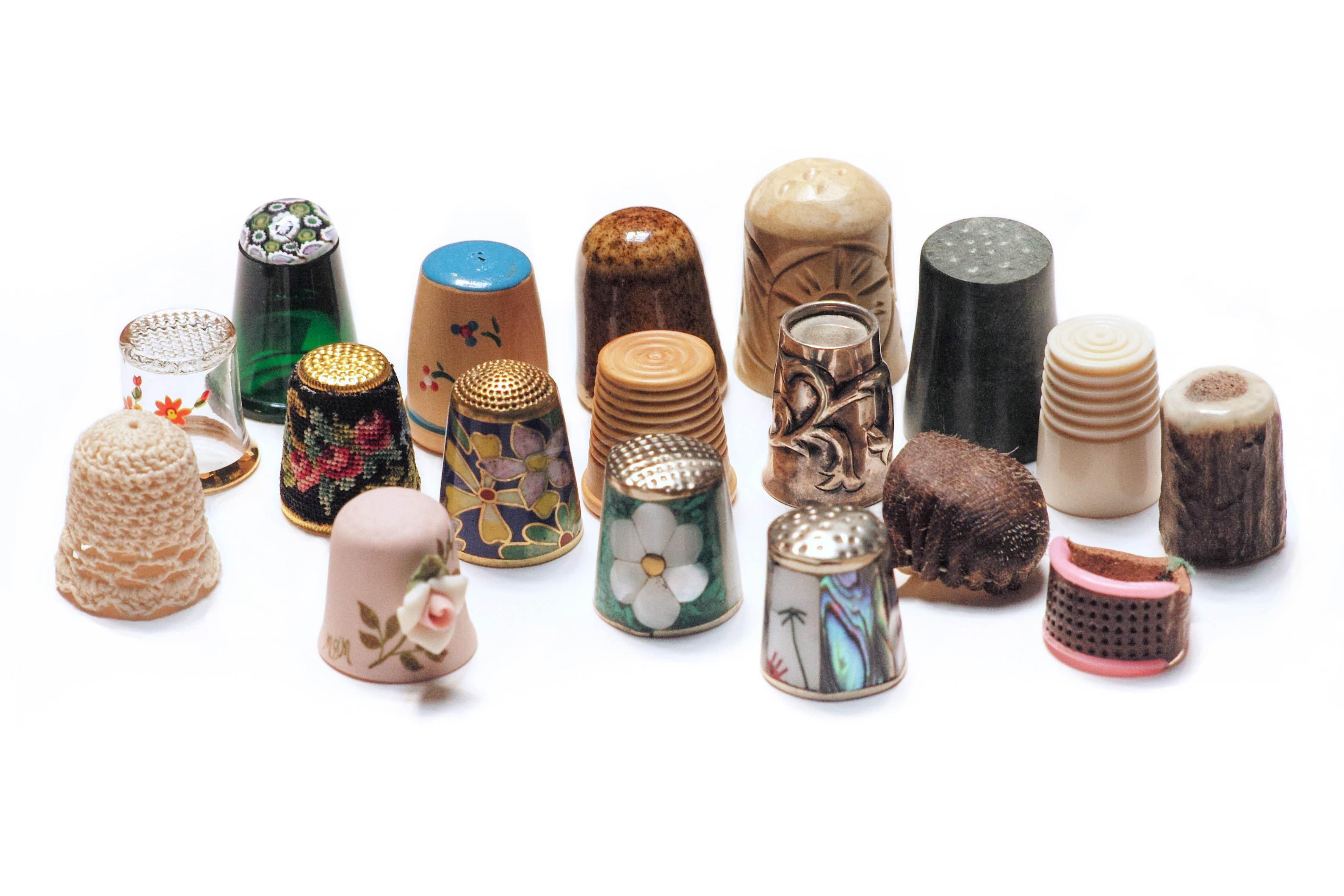 For as long as people have been sewing they have been using some sort of object to protect their hands from injury – from needle puncture and the friction of repetitive movement. With examples found in all parts of the world, the materials and designs of these objects vary, changing based on the needs and preferences of the maker. Each one reveals part of its story through its form and appearance.

Some of the earliest forms of hand protection, examples of which have been found from the Neolithic age, were made from bone and stone– strong, heavy materials to protect fingers and hands through each stitch. These early examples include flat, palm-shaped objects, and are thought to have aided in pushing a needle through thick leather and animal hide. As fabric became more finely woven, and thus easier to puncture, the need for such thick material lessened. These forms of hand protection have changed alongside changes in needle production, fabric production, and sewing techniques, influencing the function and appearance of these small, yet exceedingly important tools.

Arguably the oldest remaining metal thimble was found in China within a sewing kit in the tomb of a court dignitary, dating from the Han Dynasty (206 BC – 220 AD). Some of the other oldest extant thimbles are made of bronze and date to the Roman Empire (first century AD). Although it is likely that leather thimbles existed prior to metal thimbles, there are no extant leather examples from this era, as leather is more prone to disintegration. These early metal thimbles were finger covers much like contemporary examples, often bell or ring shaped with small indentations to prevent the needle from slipping, contributing to ease and dynamism in sewing. The earliest examples appear simply designed, with rows of uneven hand-punched indentations circling the exterior of the object. As craft techniques have grown and expanded over the centuries, some thimble users opted for more intricate, elaborate designs. Some were created from precious materials, such as silver and gold, and ornately decorated for royalty and the wealthy. Others were made to be attached to rings or pins as beautiful and functional accessory pieces. In more recent centuries thimble production has expanded and the purpose of thimbles along with it.

The first widely produced thimble was created around 1695 in England, by a Dutch metalworker named John Lofting. The production of metal thimbles expanded in the early 18th century, with the use of waterpower to aid in machine and factory manufacturing. In addition to their practical use, thimbles have come to be used as commemorative and decorative objects – delicate mementos created from a range of materials including metal, leather, cloth, wood, glass, and clay. These thimbles were made to be worn and displayed. Some were adorned with image and text: hand carved, cut, painted, or printed onto the thimble, their designs and form reflective of changes in craft technique and industry, as well as personal and cultural aesthetic preferences. They have become a popular collector’s item due to their portability and their vast range of design, material, and purpose.

The thimbles at Tatter Blue Library come from the collection of Marianne Kerr, generously donated in 2019. Marianne Kerr began her hobby of collecting thimbles in 1974. Her collection demonstrates the variety of materials and techniques used for thimble design and production. They exhibit different metalworking decorative finishes including gold plating, repoussé, filigree, and cloisonné. In addition to metal, the collection includes thimbles made of glass, porcelain, plastic, cloth, and leather. Some are whimsical, curious, and seem even impractical: thimbles in the shape of a beehive, a ski hat, a clown head, or water well. Others are presented as souvenirs or advertising material for companies and politicians, referring to particular places, people, and events in their imagery and inscriptions.

They are infinitely varied, with materials influenced by what would have been available in their historical and geographic context. These small tools hold a vast history, revealing details of the lives of the sewers who once used them, their aesthetic tastes and their projects. Though some do so more overtly than others, they all express some trace of their source– storytelling through design and purpose and evoking history and memory.

Marianne Kerr’s careful notes and descriptions documenting her collection are included in Tatter’s online database. The thimbles, as well as the informational books she donated are available for reference at Tatter Blue Library.

“The History of the Thimble The Thimble And Thimble Collecting Today.” New Pathways into Quilt History, https://www.antiquequiltdating.com/The_History_of_the_Thimble.html.

Learn to use your own thimble in Befriend Your Thimble, an upcoming virtual class at TATTER.