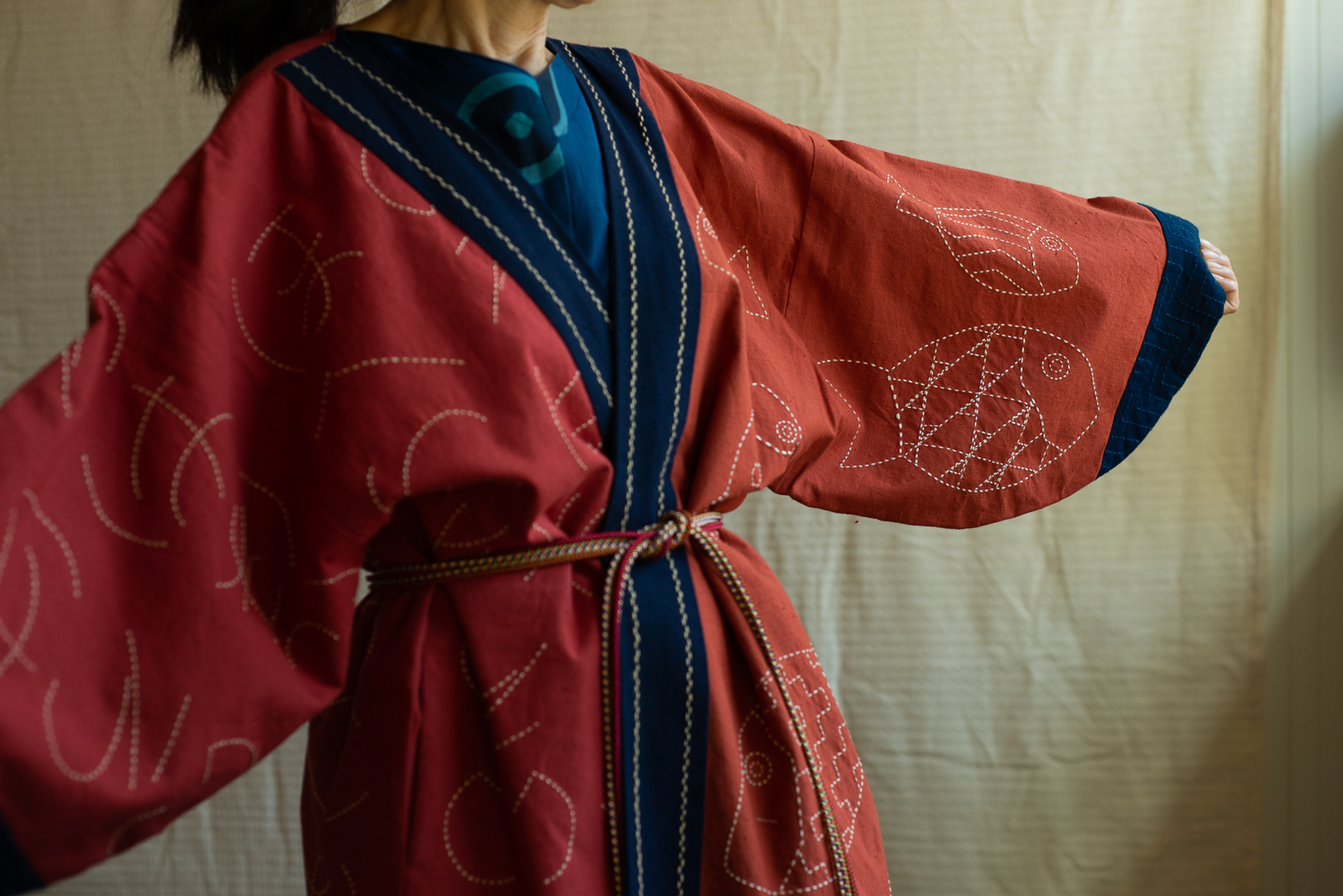 Toshie and Marico Chigyo have been stitching together for more than 50 years. Sisters born and raised in Osaka, Japan, the two were always drawn to stitching and the handmade. Sewing and sashiko were taught to them by their aunt at about 10 years of age, and from that time onwards projects like pillows, pin cushions, bags and dolls were never far from hand.

As Osaka was a big city it was much less common to encounter artisans making handmade things. Travel with their aunt and grandmother to more rural areas of Japan solidified Toshie and Marico’s love of craft. Their early memories are colorfully populated with visits to weavers and dyers. In high school, when friends began to claim their love of Gucci and Chanel, Toshie and Marico began to look for other ways to express themselves in clothing. A trip to a museum where the sisters saw a beautifully stitched fisherman’s hanten instantly resonated, and both girls began to regularly wrap themselves in highly stitched and patched clothing.

Toshie came to the US first, and Marico followed soon thereafter. Still given to wearing their original creations, their new friends and communities began asking to have similar items made. Before the women knew it, a life of collaborative stitching had taken form. Since the early 80’s Toshie and Marico have sold collections of original clothing, kimono and objects in craft fairs and museums throughout the US. All entirely made by hand, their garments take months to make. The two women share all of the same skills and prefer to teach together, though Toshie is naturally predisposed to constructing new garments and Marico concentrates on details and embellishment.

Toshie and Marico’s practice is rooted in their Japanese culture and ethos. Nothing is left to waste. They both quote their beloved grandmother with a twinkle in their eyes. “If you can wrap three beans in it, the fabric should not be thrown out. If your thread is longer than your needle, it can still be used.”

Similarly the women prefer to stitch in silence. Sashiko requires precision. It is meditative. The full experience, and the best outcome, involve focus. One must be present with one’s materials and the gesture of the hands. It is from this place that love and beauty flow into the cloth.

Toshie and Marico Chigyo will be offering a beginning sashiko class at Tatter on April 29th at 12pm.

LEARN SASHIKO WITH TOSHIE AND MARICO

Toshie and Marico Chigyo were born in Osaka, Japan in 1957 and 1959, respectively. They grew up with their aunt, Fukiko, who inspired them to create handmade clothing and other necessities for their daily life. In their childhood, Toshie and Marico visited a Folk Arts Museum, where they first witnessed the Sashiko stitch. An old farmer’s jacket was detailed with stitches and creative ideas. At that moment, their “Sashiko journey” began.

The sisters have lived in the U.S. since 1979, and dedicate their lives to textile work. Specializing in “Sashiko,” Marico and Toshie create both authentic garments, accessories, and non-wearable art. Their work ranges from smocks and jackets to handbags, pillows, and quilts.

When the Sashiko stitch was yet to be introduced to the U.S., Marico and Toshie began to make pieces and show them at local crafts shows. People were so enthusiastic about this new, yet traditional craft. This fortunate beginning enabled them to expand their reach they soon began exhibiting in arts and craft shows across the country. The unique creations were showcased at the Smithsonian Craft show in Washington D.C., the Philadelphia Craft Show in Pennsylvania, the ACC show in San Francisco, and groups shows in Boston and New York.

Along with sharing their art through craft shows, Marico and Toshie also teach “Sashiko” workshops to needle groups from the East coast to the West coast. In efforts to share Japan’s unique culture and artistic offerings, the sisters also guide yearly trips to Japan.