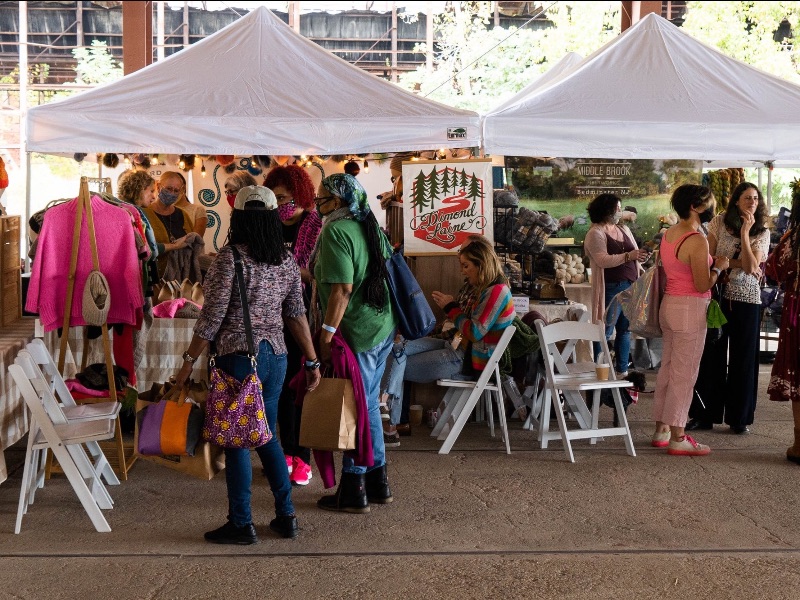 Wool & Folk is an autumn celebration of fiber, music, and community. Set on the bank of the Hudson River in Kingston, New York, the day-long gathering invites people to savor live music and local food, and to share in the community around fiber.

The first Wool & Folk took place one year ago, in October. However, its genesis unfolded over time, as organizers Felicia Eve and Catherine Clark exchanged ideas and shared stories, brought together by a shared commitment to making. Each is the owner of a yarn shop in Brooklyn, New York: String Thing Studio and Brooklyn General Store, respectively. The two women talked over what it was like to have a yarn store, circling back to the desire each felt to bring together community around fiber– outside of the fixed architecture of a brick and mortar operation. “We decided we wanted to do something together,” says Catherine. “We thought, let’s just throw a party and see what happens!”

For both Catherine and Felicia, fiber and community have always been fused. Felicia was taught to knit by one of her great-grandmothers, and to crochet by another. Later in her life, “knitting became a solace, a little island of paradise for me. It was my personal time.” When Felicia opened String Thing Studio in 2017, she wanted the store to act like an extension of her home, welcoming people in. Catherine learned to knit from her mother at the age of four. She and Felicia share a history of work in medicine: when Catherine opened Brooklyn General Store in 2002 she was working full time as a midwife– while Felicia tended to peoples’ feet as a podiatrist. “Fiber, for me,” says Catherine, “is kind of what holds me together. It’s something that becomes a part of you, and then you seek to share its warmth with others.” Outside of medicine, each woman sought to engage community through creativity, and together they imagined Wool & Folk, an event designed with care and support in mind. “We want people to feel good! We want all the vendors to succeed, and to do it in a way that is satisfying. What’s important is the experience.”

Both Felicia and Catherine had frequented fiber events for years; and both knew they wanted to do something different. They seek to offer more than commerce — setting up the conditions for conversation and being together. Their aim is plural: to create an experience that feels supportive–and fun–for vendors, enthusiasts, experts and curious novices. People who come can arrive and leave as they wish: there is no timed entry. This second year features an extraordinary 60 vendors, along with an array of folk musicians and bands. Four food trucks from local restaurants will provide nourishment. On October 14th, along the riverbank, projects and conversation will buzz and bend, in an unhurried celebration of craft, the changing season, and community.

Felicia Eve is a Podiatrist and has been a knitter for 30 years. She is the owner of String Thing Studio, host of Fridays with Felicia with Vogue Knitting Live, and a Fundraising Consultant. She lives in Brooklyn, New York.

Catherine Clark is a midwife and has been a knitter and sewist for 45 years. She is a Knitwear Designer, the owner of Brooklyn General Store and the owner of Bluebird Midwifery. She lives in Brooklyn, New York.