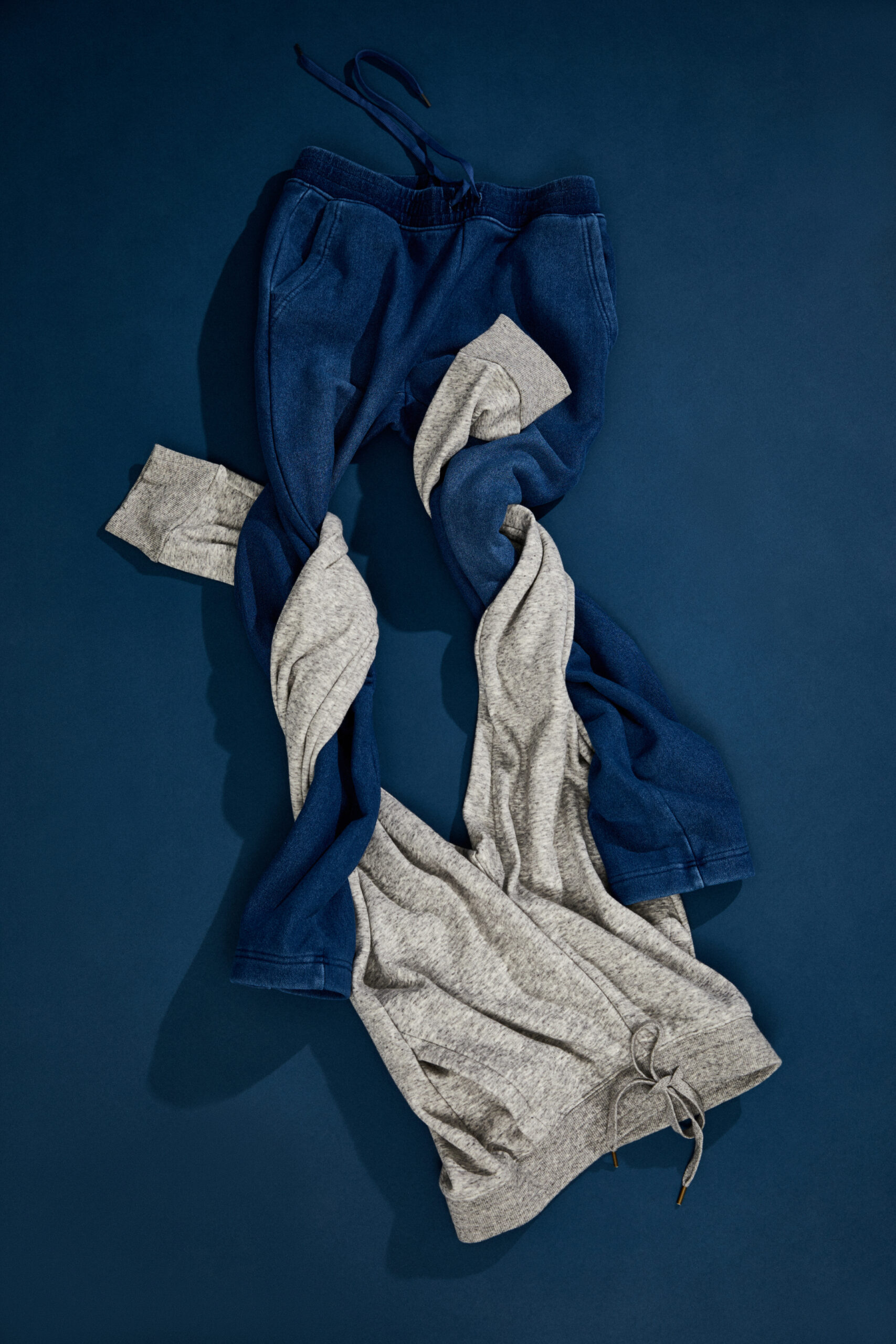 Sweatpants and Anxiety in the Age of Covid

The garment’s origin, and its newfound place at the top of the heap.

Early in New York City’s Coronavirus outbreak (after the stay-at-home order went into effect, but before a field hospital was erected in Central Park), I saw a funny post on social media. It was a screenshot of a Zoom meeting with five or six twenty-something female participants, each smiling broadly as they hoisted a leg into the small rectangular frame of the video call.  The caption read: How to test your team’s work-from-home productivity: Check who’s wearing real pants. Only one of the women wore “real” pants, and hers were jeans. The others all displayed some form of “leisure” wear, sweatpants, or leggings. One even wore red plaid pajama pants – Quelle horreur! I remember chuckling to myself over my morning tea. I, too, had been thinking about how I hadn’t worn anything but sweatpants in over a week, even as I donned a collared shirt or blouse for the occasional Zoom work call. Soon after, similar posts, memes, and articles cropped up everywhere from Instagram to the New York Times, dedicated to the phenomenon of Zoom dressing: business on top, Netflix-and-chill below.

Although the post was only in front of me for a moment, its impression has persisted, and evolved, through the continuing months of lockdown. Not because the image was funny (although I did laugh), but because the immediate, easy humor belied an anxiety at play underneath. We are each anxious about what life will look like after this is over, about what our wardrobes (and our bodies and our societies) will resemble. This collective anxiety is long-steeped, and bears classist, racist, and colonial tensions.

What, ultimately, is a pair of sweatpants? It is a pair of trousers made from a soft knit textile, secured by an elastic or drawstring waistband. The name refers to the garment’s original function as exercise clothing, pants to be worn while sweating. That seems innocuous enough, so why do sweatpants attract such stigma? Long before the pandemic, legendary fashion designer Karl Lagerfeld, who headed the house of Chanel for over 30 years, quipped: “Sweatpants are a sign of defeat.” Why do we care what someone wears below the waist while they are on Zoom? Why do sweatpants fail to constitute “real” pants? Extrapolating across the memes and articles, it appears that “real” corresponds to pants that are made of woven fabric rather than knit, fastened by buttons and zippers instead of elastic. “Real pants” are tailored, using carefully designed pattern pieces, darts, seams, and tucks to fit around the body. Where sweatpants are stretchy and pliable, “real” pants are rigid, stiff. They are pants that contain your body rather than give way to it.

On the surface, the anxiety about sweatpants is part of a larger debate over “athleisure”, which has been raging in the fashion industry for some time. The debate often targets women who wear yoga pants and leggings to brunch instead of to the gym. Evoking the tropes of Mark Zuckerberg’s CEO hoodie and suburbia’s Lululemon-clad moms, this conversation turns typically to a discussion of dress codes, comfort, and the seeming “casualization” of the workplace and society. And of course, the pandemic’s humor-laced anxiety over sweatpants connects to that familiar conversation about yoga, executive suites, dress codes, and brunch. Yet the debate is grounded in deeper questions about why we are so uncomfortable with clothing that is loose, comfortable, unstructured, and untailored in the first place–questions that are deeply rooted in a shared history and the practice of colonization.

When European nations began their colonial expansions into Asia, Africa, and the Americas, Native residents’ clothing– loose, draped, and sometimes revealing–was one visual indicator of difference. Clothing became a symbol, as potent as the color of skin, that the native residents were inferior. In “civilized” society, people contained their bodies – inside a starched, tailored suit for men or a stiffly boned corset for women. To let the body’s flesh go uncontrolled was inappropriate, lascivious, or lazy. In British-ruled India, local residents were required to don tailored, European-style clothing inside government buildings, British-owned recreational clubs, and restaurants. Local dress, such as the kurta pajama (an ensemble of a long tunic, or kurta, and loose pants, or pajama) was banned. Despite the colonial edict, today the kurta pajama is still worn throughout India, both for everyday and for formal occasions.  It is telling, however, that when the English adopted the word (and the garment), the pajama was designated for sleep and loungewear, clothing to be worn in private, at home, not appropriate for public society.

Recently, sweatpants have leapt beyond their status as a uniform for exercise or sleep, becoming an object celebrated by the runway. Balenciaga sells branded versions for 800 dollars. Yet when sweatpants are discussed in the fashion press, they are most often lumped together with tracksuits, hoodies, and sneakers in a category dubbed “streetwear.” This term has clear racial undertones; “street” is code for “urban” or Black. Just like the colonial othering of the pajama as inappropriate, the fashion designation of sweatpants as “street” sets them apart from “real” ready-to-wear. As Kerby Jean-Raymond, a Black designer based in New York, pointedly asks: “I just want to know what’s being called ‘street,’ the clothes or me?”

Clothing is a social language. It is the way we make our bodies socially legible to those around us. The pandemic has enforced a sustained reexamination of our bodies and our society.  We are now more aware of the space our bodies (and our respiratory vapors) take up in relation to other humans. The lived reality of dressing in isolation has been about comfort, as we search for ways to ease our bodies and our minds during uncertain times. And while it’s funny and reassuring to joke about the way our daily wardrobes have embraced what was once a sign of fashion defeat, we can’t ignore the bias latent in this judgment, particularly in the wake of global protests against racism and police brutality. Bias and racial anxiety surround us, even in those objects which seem innocuous–like sweatpants.

I’m not asking you to retire or to avoid sweatpants. On the contrary, go, wear them, enjoy them, and don’t judge yourself for it. Sweatpants at a Zoom meaning (or even in the office, post-pandemic) don’t signal the end of fashion or the breakdown of society. Perhaps, instead, if we pull them on aware of their history, sweatpants could point to a more thoughtful—and a more inclusive–future.

Next StoryThe Mask Becomes Us