The sculptures of Amanda Cobbett. 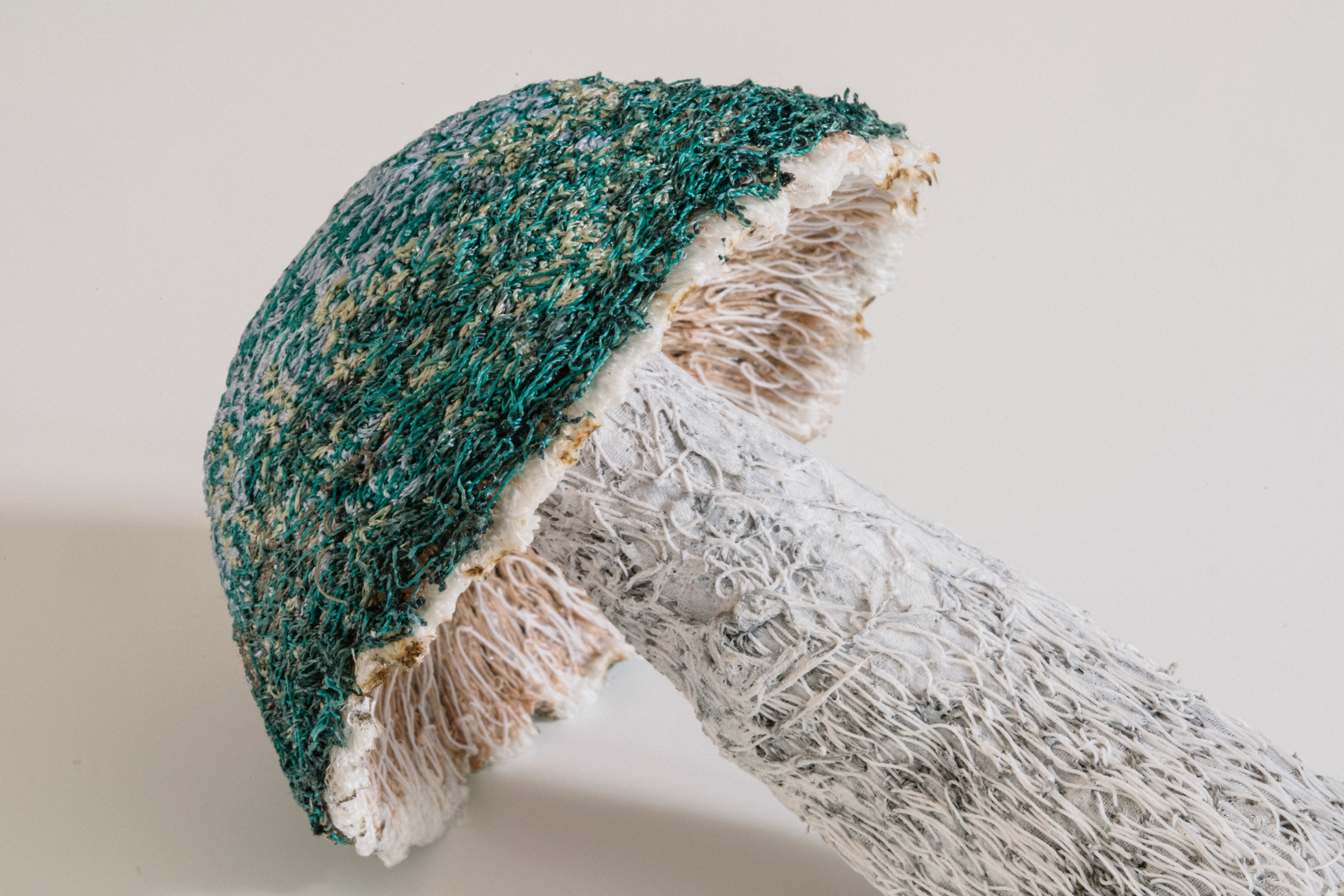 From a Surrey HIlls studio surrounded by woodland, hyper-realist artist Amanda Cobbett recreates the marvel of lichens, mosses and fungi with thread and paper. Mounted for the most part on black backgrounds, her sculptures glitter. The natural beauty of our forest’s most ancient plants remain lusciously suspended in time and space.

Cobbett recalls the slow pull of a drawer, many years back, in the archive of the department of Mycology at Kew Gardens. Open, the drawer revealed a tray of preserved fungi. Regarding their shriveled, posthumous state, Cobbett queried herself:  “What am I looking at? Why are we saving this? What about these grey, parched forms could possibly be relevant or important?”

The visit inspired the artist, trained both in printed textile design and botanical illustration, to experiment with her materials. She began recreating mycological specimens in a state of more apparent vitality, still full of the color and shape that compels wonder during a walk through the woods.

As a baby, Cobbett never crawled, opting to scoot around on her backside. “It wasn’t traditional,” says the artist, “but it left my hands free. And they were always in the dirt, delightedly picking up leaves and spiders.” But she was taught by her parents to fear the woods, and it wasn’t until she moved near a woodland as an adult, and took a daily walk with her very slow dog, that the forest became a good friend.

What is immediate in this artist’s work is her devotion. In part it’s the fastidious articulation of detail, but it is also her choice of subject. The purposeful recreation of a sliver of bark or a tiny patch of lichen gives us pause. The surprise encounter with something we know, but often overlook, translated into a wholly new material, accentuates its importance.

Perhaps one of the benefits of fiber is its ability to speak to the same haptic receptors in our fingertips as these actual organic forms. We imagine caressing the sculpture, connecting those conjurings to memories of touching moss on a forest floor. We are called back to the time in our lives before walking. Whether we crawled or scooted, we roamed close to the surface, our vantage illuminating only that first micro layer of ground.

Cobbett constructs these forms in utter slowness. Her cadence relates to the rate of growth in some of these species. Lichen, for example, that symbiotic partnership of a fungus and an alga, matures so gradually compared to our human lifespan that its growth evades our perception. Thoughtfully, something in this methodical stitching practice nods its head to the slow expansion of our forest.

To thread is to pervade. It is to pass continuously through the whole course of something. As a thing, thread is a twisting of filaments, designed to join fabric together. Cobbett’s sculptures thread their way through us, seaming us to landscape.

To learn more about the work of Amanda Cobbett visit amandacobbett.com