The Threadwork in Leaves of artist Susanna Bauer. 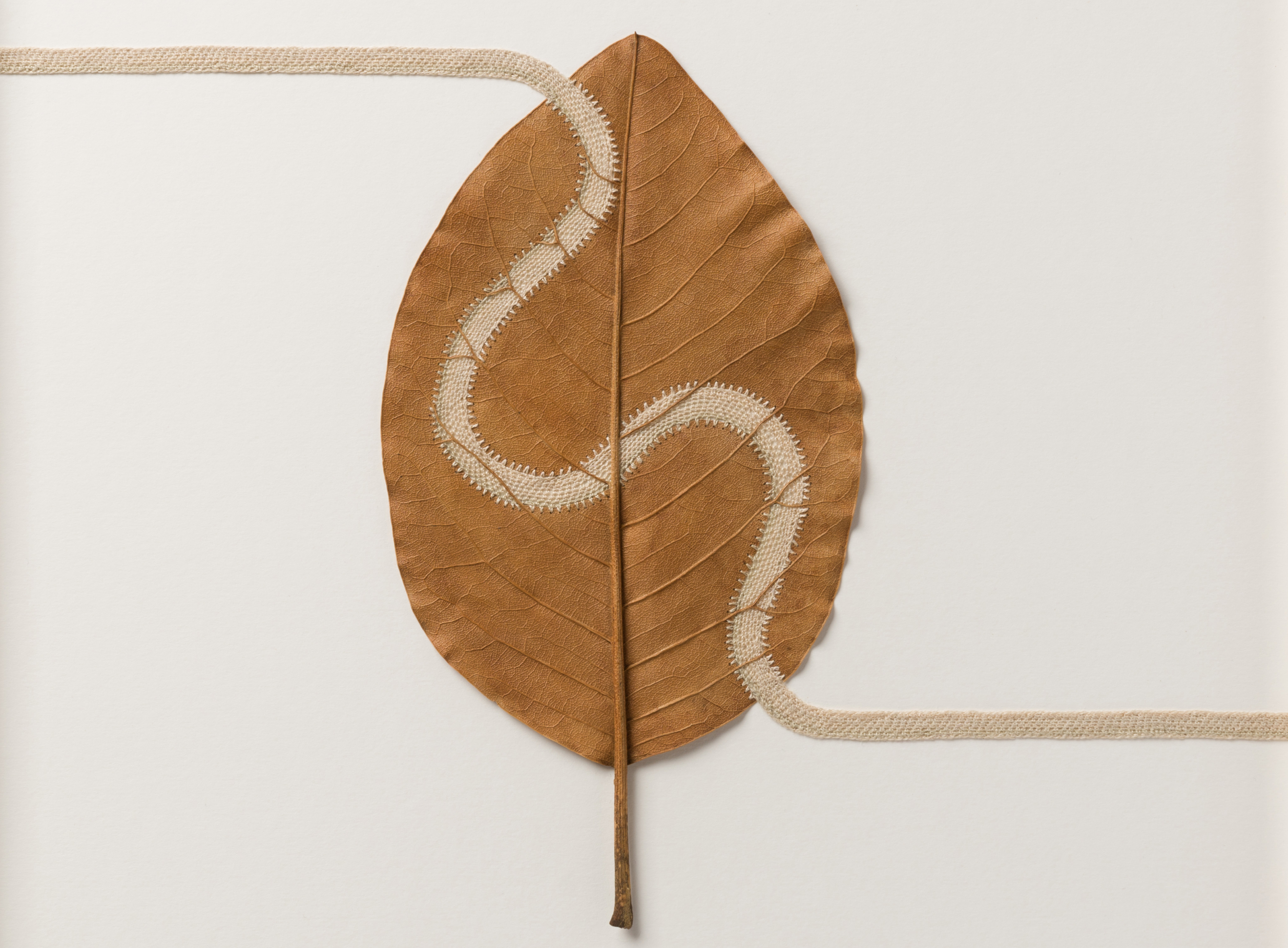 The first time artist Susanna Bauer worked intentionally with a leaf, she mended it. Gathered on a walk, she brought it back to her studio. It had already fallen from the tree, and in its drying state, had lost its photosynthetic green. Wanting to press pause at this moment in the life cycle and somehow to repair a portion that had disintegrated, Bauer filled the rupture with careful stitching.

Bringing thread to leaf was a revelation for Bauer, who has spent the last twelve years exploring new dialogues between the two. She performs diverse interventions at a very specific moment in time: the point in a leaf’s cycle when it falls, having completed its job of storing energy and nutrients for the tree, but before it decomposes to bring nourishment back into the soil for the roots. Bauer attends to each leaf entirely, producing newly enumerated

outcomes out of the acuity of her attention. Her gestures highlight far more than a leaf’s shape, often illuminating the anatomy of the interior, or creating entirely new geometries. She has been known to immortalize the curvature of how a particular leaf has dried, or to conjoin different leaf species. The medium has proven endlessly fertile. Perpetually amazed by the elaborateness of systems employed by nature and its complex growth patterns, she finds intricacy in laced capillaries. Threadings of veins which carry sustenance through organic forms inspire her to devoted response, a cascade of carefully calibrated stitching engagements with the specific contours of her fallen subjects.

Originally from Germany, Bauer has lived a multitude of professional lives. After studying landscape architecture, she formally trained in industrial and product design modelmaking, which helped her to hone engineering and dexterity down to the tenth of a millimeter. She worked for two decades in London in film and advertising, specializing in miniature and architectural modelmaking. For years she traveled from London to her partner’s home in Cornwall, often bringing back various natural forms.  Once, she was compelled to cover a small found log in crochet, in an effort to hold or contain it. Though Bauer practiced craft in her urban life, she recognized a desire to immerse in the outdoors. Eventually she moved south permanently, and began a full time sculptural practice in collaboration with nature.

A large body of work contends with a leaf’s perimeter. Patterned stitches traverse the exterior, growing more decorative with each concentric ring. The viewer is presented with the surprise of a lace edging on a natural form. Since the invention of this form of needlework, lacemakers have looked to nature as inspiration for the countless patterns found in decorative collars and trims which framed and elevated the faces of the European courts in the 16th century. Bauer’s work is no less laborious, and her decision to embellish something as common as a fallen leaf somehow returns the favor, redirecting the homage from human back to nature.

But it is in the wilder, more unexpected responses that Bauer truly flexes both her craft rigor, and tendencies towards more provocative shifts. A dried leaf on its way back to dust is suddenly sewn into a cube. An interior, scalpeled circle reroutes the leaf’s main artery such that water can no longer pass through. Without cease the works read like fine china. But Bauer is both sublime caregiver and radical surgeon. She is at once preservationist and revisionist. This juxtaposition of extraordinary tenderness with extreme alterations of form give the work an undeniable power.

Going back to that first patched leaf, perhaps Bauer was mending herself, weaving her own life back into a harmonious dialogue with nature, stitch by stitch. Her efforts seem to pay something forward. As we marvel at her choice to spend her hours creating these works, and at the offerings themselves, we are reminded of the duality of the fragility and endurance of nature. Her skillful stitches, wandering across leaf and stem, work their way through us, reconnecting us to our natural roots.

To learn more about the work of Susanna Bauer visit susannabauer.com