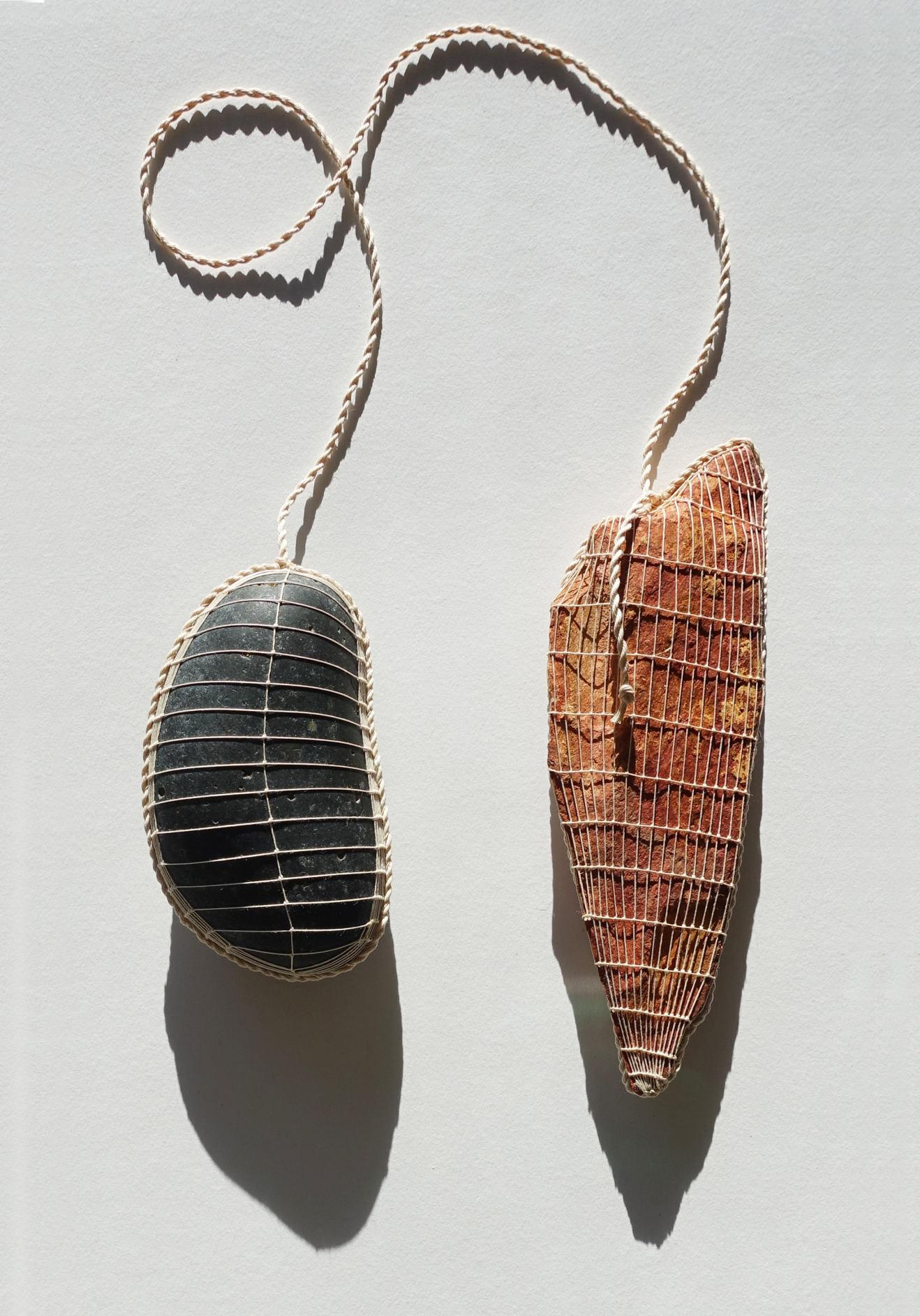 The Knotted Stones of Laura Fischer.

Laura Fischer’s knotted stones spark wonder and command attention. Those of us who gather stones or other natural forms on walks can relate to that moment of awe, when a form presents itself, compelling us to pick it up and pocket it.

The geometries encasing Fischer’s forms are often intensely regular. A placement of deliberate knots where each thread’s longitude meets its latitude creates a rhythmic skin. The intervals pay homage to the stone’s present geometry, the totality of the knotted terrain acknowledging each millenia-shaped curve or crevice. We know the phrase ‘leave no stone unturned.’ Fischer ventures further, leaving no nuance unexamined. As we gaze at her sculptures, we know by an intersection of memories how the form might feel in our palm: the smoothness and weight of the worn rock, punctuated by a grid of netting.

Fischer describes herself as an artist mostly concerned with process. She prefers to immerse in the ‘doing’, a space that she describes as non-verbal or pre-verbal. Selecting a form is subintentional. Though she prefers natural fibers, the exact twine doesn’t matter, as long as it doesn’t have too much stretch. The knots aren’t specific in identity, though their integrity is critical to structural success. She knots in the same way she discovers her subjects in the landscape: outside of words, wholly intuitive.

In some works Fischer leaves her cords dangling and fringy. We can perhaps map her route by the fiber’s starts and stops. In these pieces it is the weaving process that features. Other bound rocks mute the evidence of the twining process. The cut ends are carefully woven in, leaving us unsure of the start and the end or how it came to be. These pieces speak more to the stone’s shape. And sometimes Fischer feels the constructed casing doesn’t ‘arrive’ to become an acceptable, finished work. When this happens, Fischer is compelled to cut the casing and release the stone. The exoskeleton sags a bit in the absence of its armature, but the rigor of Fischer’s constructions allows the form to remain. The stone is still powerfully felt.

Earlier works in Fischer’s art practice investigated the curious transfer from weaving to quilting when her female ancestors immigrated to the US. Certain patterns and motifs survived the change in medium, begging the question: are patterns part of our archetype? Primary symbols of identity? These notions intertwined pattern with longing, cultivating Fischer’s desire to immerse in a similar process to gain a sense of be-longing. She has distilled her practice to one of Noticing, Gathering, Considering and Wrapping, employing a kind of found loom, some natural fiber, and an enduring appetite for process to produce these sculptural outcomes.

Like Fischer’s found stones, we are each a product of time and space, sculptural outcomes of the many intersections that lead to our being. Also like the stone, we are always slowly changing form, ever honed by external forces. Fischer acknowledges this universality, joint by joint, link by link, as she rhythmically traverses each path and each pebble, trussing time to space.

To learn more about the work of Laura Fischer visit lauralivingstonfischer.com

Next StorySustainable Ecologies/ Weaving The Ocean