The conceptual work of Anubha Sood. 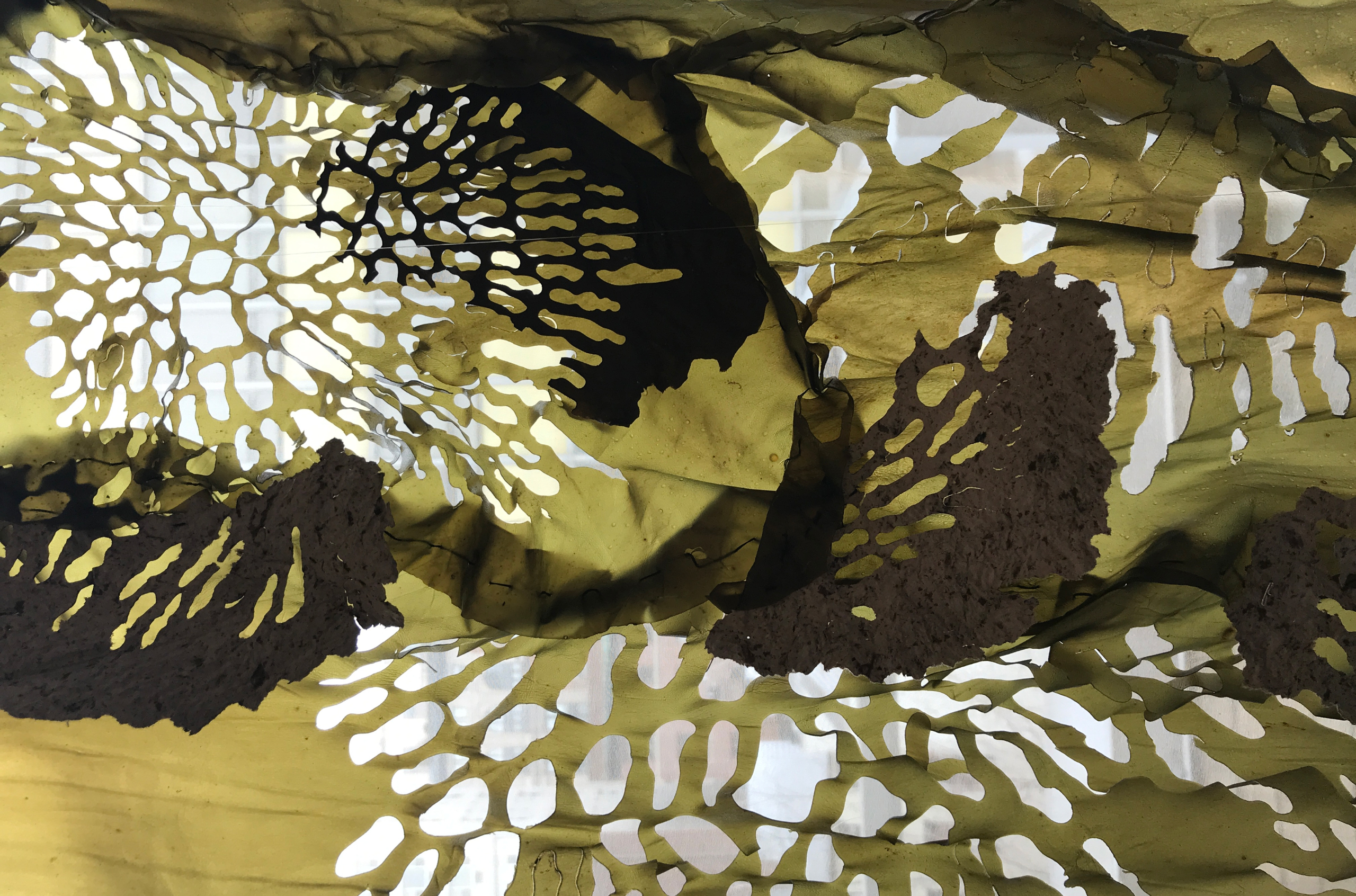 Part maker and part thinker, conceptual artist Anubha Sood connects dots between cloth and our environment through a series of fabric-building techniques incorporating unexpected natural materials. Kelp, jute, rice and human hair are some of her choices. The end result is not cloth, per se – or even fully realized sculpture. The forms are more like aesthetic gestures for contemplation, placed in our path, commanding us to pair unlikely cohabitants and to ponder the ‘why.’

Sood is concerned with what she calls ‘sustainable ecologies.’ While earning her Masters degree in textiles at Parsons, she was drawn to study bio design, an emerging network of practices that employs living materials.  For this artist, sustainability can only be understood in the larger context of a functioning and balanced ecosystem.

Sood has been weaving with sea kelp, gathered from all of the oceans she has either visited or dwelled beside. The result is a catalog of personal migration, and Sood says poetically that through these works, she is weaving together the oceans, an allusion to the greater connectedness at play: our ecosystem.

The concept of decay is also part of Sood’s focus. Sood refers to her works as ‘living beings’,  – not invoking a scientific definition, but explaining her choice to create forms that are neither stagnant nor permanent. Natural materials, like our own bodies, are in constant flux. Sood collects kelp from the tides. Kelp alters outside of its liquid environment, as water evaporates from its body and its form hardens into a skin of salt. At the micro level, salt, a natural attractant of humidity, slows decay.

When I ask about the relationship between water and cloth, Sood answers that for her, the connection is obvious. In her native India Sood grew up near rivers. She saw that the health of these rivers had everything to do with textile processes and waste. This same linkage determines the health of our oceans, now so saturated with the microplastics cast off by synthetic fabrics that certain species of fish are permanently altered. And though many of us do not immediately connect water to cloth, the use of water is embedded in each step of cloth’s manufacture: the application of dyes, the addition of specialty and finishing chemicals, and final rinsing.  All take place in and affect bodies of water.

“For the health of our planet to be sustained, we must reconsider our systems of manufacturing,” says Sood.

Sometimes it is a thinking artist, placing unconventional materials in an unexpected place, who urges us to see the world anew. Sood’s forms, intricate and informed by years of textile study, are nevertheless shy of defining themselves as art or design. Like a seaweed leaving its native habitat of the ocean to brave the dryness of land, these works give us pause, asking us to reflect upon an environment we have rendered inhospitable.

To learn more about the work of Anubha Sood visit anubhasood.com

Next StoryThe Vastness of Minutia