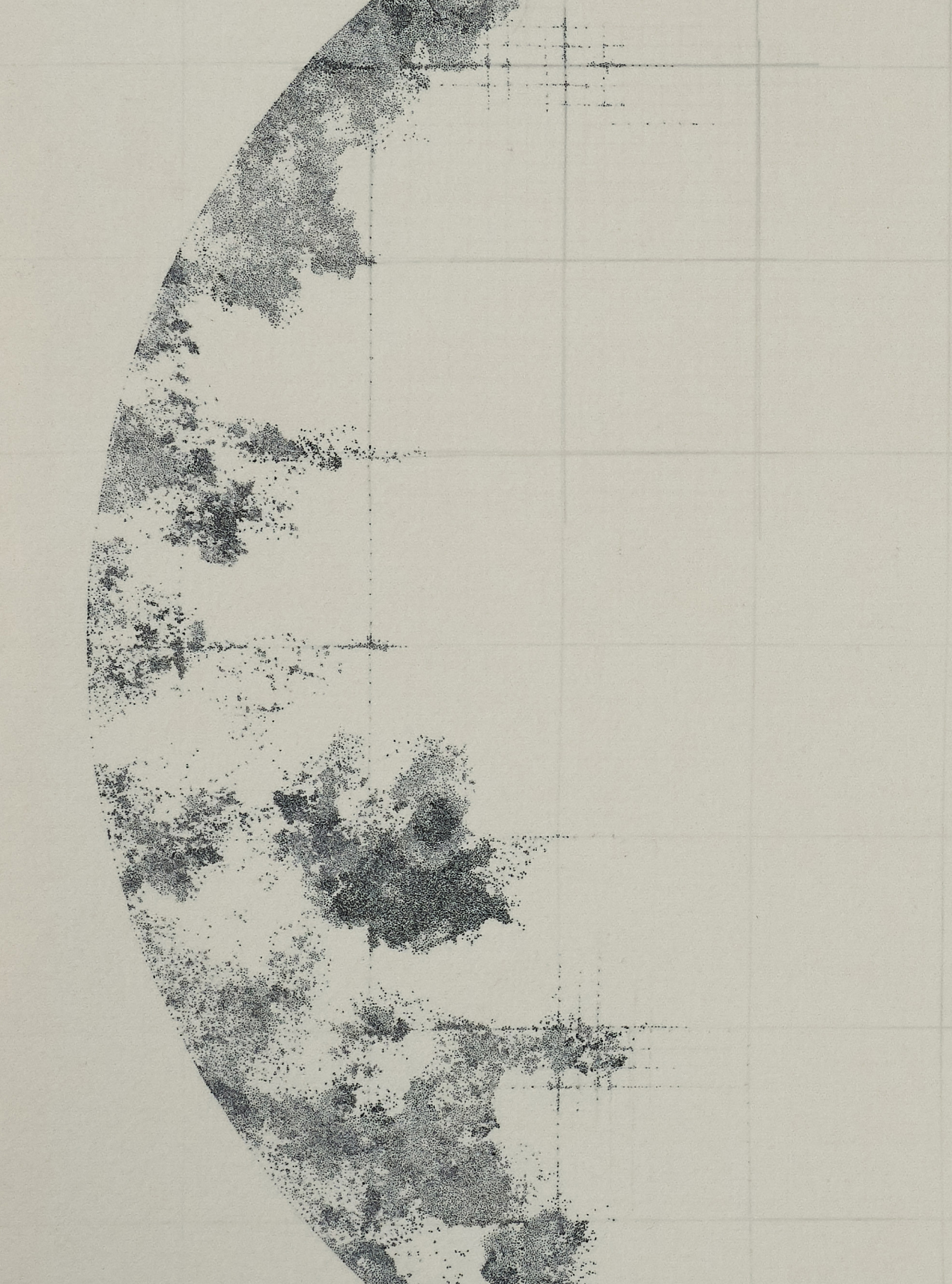 The Vastness of Minutia

Landscapes of time in the embroidery work of Richard McVetis.

In our conversation, artist Richard McVetis immediately brings up the famed 1970’s film: Powers of Ten, where husband and wife design team Charles and Ray Eames display the spatial parameters of human understanding:  zooming us to the farthest idea of outer space, before plummeting back down to Earth, to enter through the skin of a human hand, continuing ever-smaller, until we reach a single proton within an atom.

The journey of perceiving McVetis’ work is akin to the wild ride of Eames’ film. You can feel the expansion of the eye and the mind as insights pile up. Most of McVetis’ work is made of black cotton thread carefully embroidered on a surface of boiled wool. Supplant the Earth’s surface in the film with the wool and the scale of your attention shifts: what initially appears as the contour of a planetary form shifts to a map of tonal, stitched archipelagos. At closer range, the archipelagos disperse into a murmuration of tiny, clustered marks..

Sometimes McVetis forgoes his stitching practice in favor of ink on paper. He doesn’t stray from the choice of black marks insistently populating a white surface, but compared to the exceedingly slow labor of stitching, filling an entire drawing in a day is warp speed. The embroidered versions take months to complete. When asked to describe the differences between ink and thread, McVetis says that, though he loves to draw, and has since childhood, stitching provides whole new dimensions, both conceptual and physical. His methodical, sewn marks nestle inside the surface of the wool like seeds waiting to germinate. Their relative rates of submersion cause them to appear more or less dark: a spectrum of pale grey to black. The marks travel through the surface to the back, tugging at our attention. As we follow them, what we apprehend shifts again. The scatter of independent stitches plunges through the wool fabric to the backside of the work, calling us to see one continuous, connected posterior root system, messy and alive.

McVetis finds this an apt metaphor for human life. What we present to the world, the front of the embroidery, is curated and tidy. A persistent collection of careful footsteps. A map of where we have been. As our marks dive back down to the underworld, we find the more complicated, breathing, connective tissue. A dense chaos, partnered to the intentional front, vital to its success.  McVetis chooses to display his pieces in the center of the room, so that we may orbit them, seeing them whole.

McVetis’ embroideries change our perception, Encountering his drawings in a gallery, you might interpret the collection of tiny dots as gradual. However, it is the nearby presence of McVetis’ methodical embroideries which cause the careful drawings to appear accelerated. In the quiet of his studio, the unrelenting descent and ascent of the black cotton fiber making its way through the woolen ground is noisy –  an adjective not normally associated with needlework.

The simplicity of McVetis’ artworks belie their impact. This work appears gentle, yet to engage it, to focus on its paired surfaces, is to yield to an altered perception. These embroideries toggle across the congruity of macro and micro, reminding us: the farthest notion of outer space can resemble the span of an atom. Vastness housed inside of minutia.

To learn more about the work of Richard McVetis visit richardmcvetis.co.uk