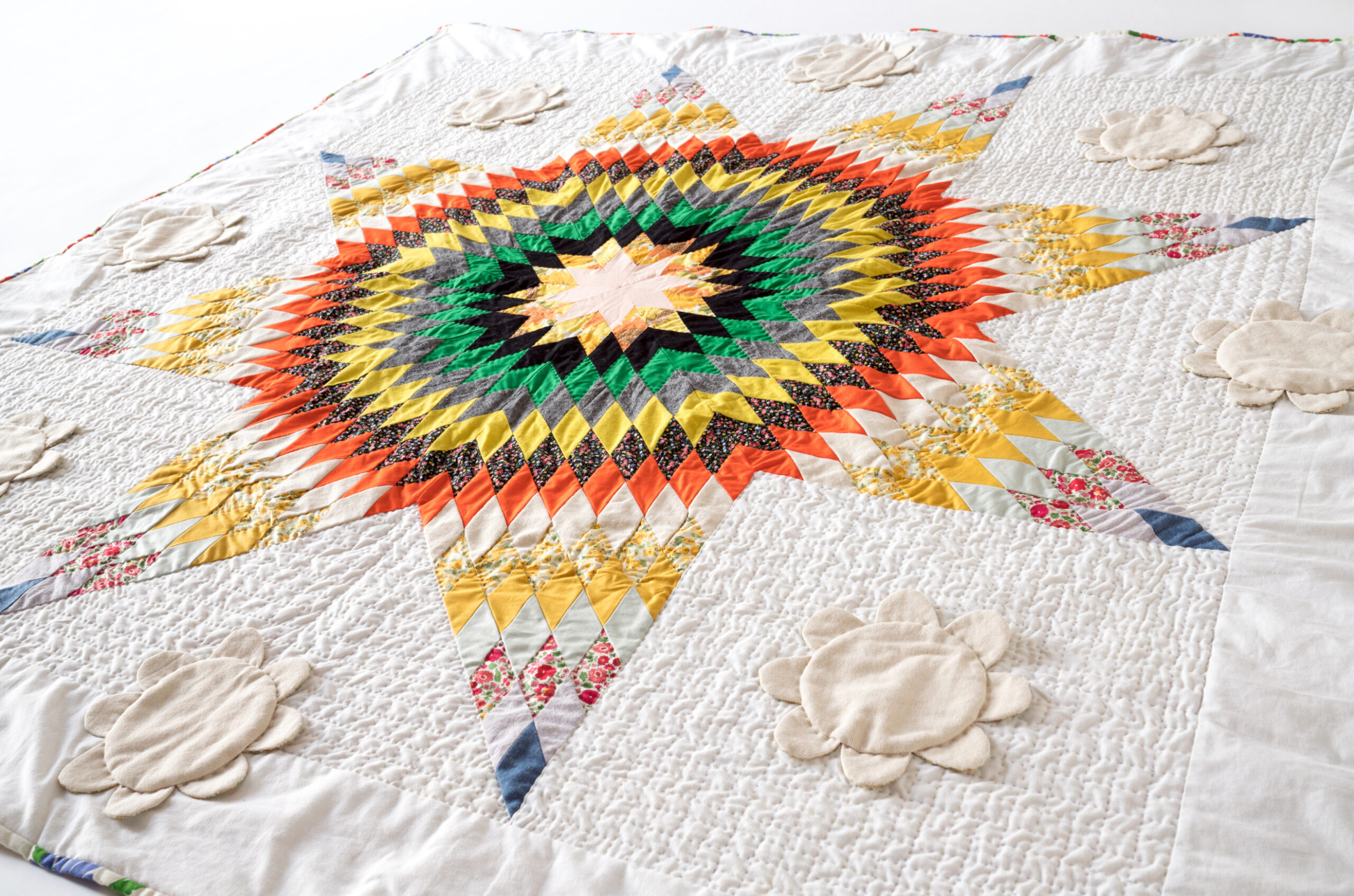 On a normal, non-pandemic work day, artist and fashion designer Lindsay Degen spends a notable four hours commuting to and back from her day job. When mandatory quarantine arrived, Degen made quick use of her newfound time. She imagined and sewed an authentic Lone Star quilt in her home in Providence, Rhode Island, dedicating every “commuting hour” to its construction. Degen used only cloth and materials found within her apartment, to piece the work she calls the (A)Lone Star Quilt. Quarantine’s abrupt mandate to self-sufficiency invited a resourceful response, and Degen assembled her design, including the quilt’s inner layer, by patching together only what was at arm’s reach.

The Lone Star quilt block stands as one of the oldest and most recognizable American quilt patterns. Extremely popular with the Amish and throughout the South, the pattern was named by Texas quilters–its name a tribute to the Lone Star State. Degen’s quilt employs an eight-point star, with rings of concentric diamonds radiating dizzily from its center.

“This quilt designed itself,” says Degen. “As I was constrained by the amounts of leftover materials in my apartment, the color patterns were dictated solely by how much of any one color I had left. The star’s rings require different amounts of yardage, and I was committed to using only what I already possessed, so I was limited in my choices.”

Though a longtime maker, content in a quiet, creative space, Lindsay is also a social being. As quarantine stretched, aloneness prevailed. The powerful central motif of the (A)Lone Star Quilt stands as metaphor for the condition of solitude. In this quilt, happy, daisy-like flowers — a shape repeated across many Degen pieces — support the central star. However, their floppy, three-dimensional petals are only color-patched on the backs. They surround the star like present but unavailable friends.

Quilting is a language with an evolving history, but a traceable lineage. When we quilt, we join a long conversation with the past. Quarantine may not provide physical company. Yet how beautiful it is to reach across time and space through motif, to commune with those who quilted before us.

Learn more about the art of Lindsay Degen.

Next StoryFrom Still Life to Altar